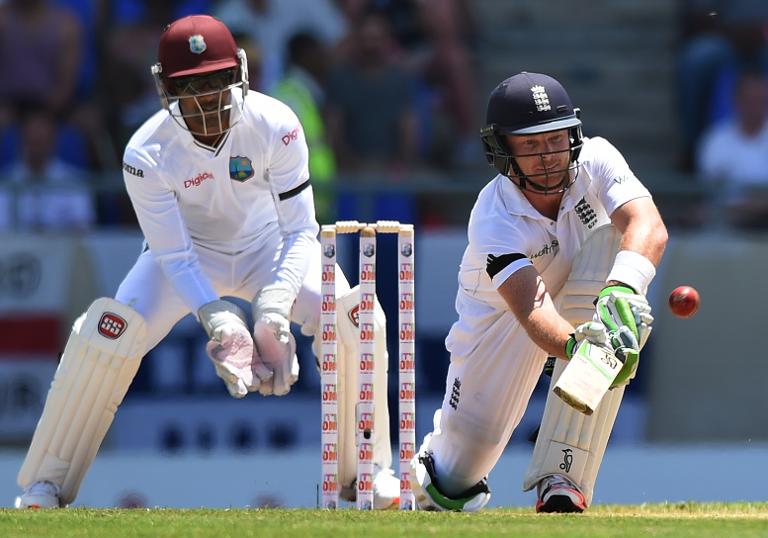 Ian Bell’s composed 143 was the cornerstone of England’s revival from the unease of 34 for three to the considerable comfort of 341 for five at stumps on the opening day of the first Test against the West Indies on Monday.

On the pitch at the Sir Vivian Richards Stadium in Antigua that lived up its well-established reputation as a featherbed, the 33-year-old right-hander respected the early excellence of a disciplined fast bowling attack before flourishing in the remaining two sessions of the day.

His 22nd Test century spanned 342 minutes and was embellished by 20 fours and one six, most of those boundaries completed with the trademark polish for which he has been identified since making his debut against the same opponents 11 years earlier at The Oval in London.

Bell looked set to continue into the second day, only to be undone by a superb delivery from the persevering Kemar Roach with the second new ball to be caught at the wicket in the penultimate over before stumps were drawn.

He received considerable assistance from Joe Root in the rescue effort as the slimly-built Yorkshireman stroked 81 in a 177-run fourth-wicket partnership that drained the enthusiasm from the home side’s frontline bowlers in relentless late afternoon sunshine.

They came together within the first hour’s play as Jerome Taylor, Roach and Jason Holder all struck to have Denesh Ramdin and the rest of his team delighted with the decision to bowl first on winning the toss.

All-rounder Ben Stokes batted in keeping with the transformed mood of the day’s play when he replaced Root, who played on to Taylor at the start of the final session.

Stokes increased the pressure on a deflated Caribbean side with a stroke-filled 71 not out at almost a run-a-ball that overshadowed the classy vigilance of his senior partner in a stand that realised 130 runs for the fifth wicket.

It was so very different in the early exchanges, however, as England’s woes from the World Cup embarrassment seemed set to continue when Jonathan Trott, in his 50th Test, edged a delivery from Taylor before he had scored for Darren Bravo to take a regulation catch at first slip in the day’s first over.

It was Trott’s first appearance for the senior England side since leaving the Ashes tour of Australia 17 months earlier at the end of the first Test for what was believed to be a stress-related illness.

His opening partner, Alastair Cook, lasted just another half-an-hour before a tentative forward prod resulted in an inside-edge off Roach onto his stumps.

Gary Ballance was England’s other casualty of the morning, the attacking left-hander drawn to chase a wide delivery from Holder for Bravo to take his second catch at slip.

Sulieman Benn, preferred as the lone specialist spinner over Devendra Bishoo, despite the leg-break bowler’s outstanding domestic season for his native Guyana, made no positive impact for the home side, conceding 85 runs off 26 wicketless overs.

England’s frontline seamer, James Anderson, is playing in his 100th Test, the 13th England cricketer to reach the landmark. He needs four more wickets to surpass Sir Ian Botham’s record of 383 wickets as the most by an Englishman.

Should the visitors continue to pile on the runs on the second day, Anderson and the other England bowlers will have the advantage of a formidable total to defend against a batting side noted for its fickleness and unpredictability.