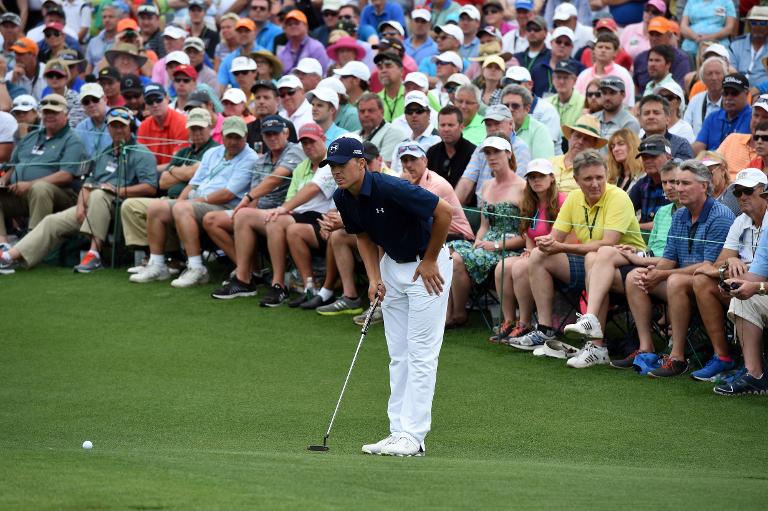 Jordan Spieth reached the turn in Sunday’s final round of the Masters on the verge of taking his first major title in historic fashion with a five-stroke lead at Augusta National.

The 21-year-old American was at 17-under par entering the back nine, one under for the day, and being tested by last-pair playing partner Justin Rose, the 2013 US Open winner from England who stood on 12-under after a bogey at nine left him level on the day.

US 44-year-old left-hander Phil Mickelson, a three-time Masters winner and five-time major champion, was third on 11-under after playing the front nine at level par.

Three times on the front nine Rose trimmed Spieth’s lead from four shots to three and each time the Texan boosted his edge back to four on the very next hole.

Spieth, who squandered a front-nine Masters lead on Sunday last year and settled for sharing second, must face down the intense back-nine drama to claim the green jacket symbolic of Masters suprmeacy and the top prize of $1.8 million at the $10 million event.

Spieth answered with a 17-foot birdie putt at the third to reach 18-under but botched a chip at the fifth on the way to a bogey, only to have Rose bogey the par-3 sixth and put Spieth’s lead back at four.

At seven, Rose went into the trees with his first two shots but blasted his approach five feet from the cup and made par while Spieth missed his par putt from the same distance, only to again bounce back with a birdie at eight, his record-tying 25th of the week.

Spieth, who would jump from fourth to second in the world rankings with a victory, would be the second-youngest winner in Masters history, five months older than Woods when he won his first major in 1997.

And Spieth, the first player since Greg Norman in 1996 to lead outright after each of the first three rounds, could become only the fifth wire-to-wire winner in Masters history, joining Craig Wood in 1941, Arnold Palmer in 1960, Jack Nicklaus in 1972 and Ray Floyd in 1976.

With 25 birdies through 63 holes, Spieth had matched Mickelson’s Masters 72-hole birdie record from 2001.

Spieth could become the seventh man to finish second one year and win the Masters the next, the first since his fellow Texan and mentor Ben Crenshaw won in 1984. Crenshaw, 63, played his 44th and final Masters this week.

Mickelson has only one top-10 in his past 31 starts but it was a runner-up effort at last year’s PGA Championship.

World number one Rory McIlroy and 14-time major winner Tiger Woods had faded well out of contention after starting the day 10 adrift. Woods missed every front-nine fairway and was favoring his right wrist after blasting an approach off pine straw at the ninth.

Woods, in many ways, had a successful week, proving at age 39 that he can still contend in a major despite prior questions about his physical health and possible long-term woes in his short game.

McIlroy birdied the seventh and eighth but was nine adrift and out of the hunt for his third major win in a row to complete a career Grand Slam.