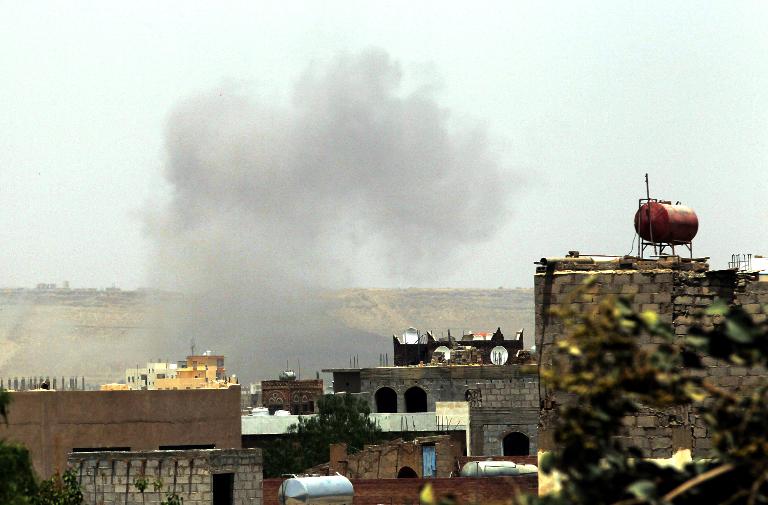 Riyadh on Sunday demanded Tehran stop backing Shiite rebels in Yemen but insisted it is “not at war with Iran”, as Saudi-led warplanes launched fresh strikes on rebel forces.

In the third week of the air strikes mounted by Saudi Arabia and its allies, the International Organization for Migration said it flew a first plane-load of 143 foreigners out of Yemen.

At a gathering in Doha, UN Secretary General Ban Ki-moon appealed for the resumption of Yemeni peace talks and for “a cessation of military moves as soon as possible”.

Saudi Arabia heads a coalition of nine Arab countries which since March 26 has carried out air strikes against the Huthi Shiite rebels who overran Sanaa in September.

Riyadh feared the rebels would take over the entire country and move it into the orbit of Shiite Iran, Sunni Saudi Arabia’s regional rival.

Saudi Foreign Minister Prince Saud al-Faisal urged Tehran not to “assist the criminal activities” of the Huthis “against the legitimate order of Yemen and (to) stop the delivery of weapons and aid” to the rebels.

But he insisted “we are not at war with Iran,” which denies arming the rebels and whose supreme leader Ayatollah Ali Khamenei has described the coalition’s involvement as “criminal”.

There was no immediate reaction from Tehran.

“Iran has no military forces in Yemen,” he said, quoted by the official IRNA news agency.

The rebels include forces who have remained loyal to ex-president Ali Abdullah Saleh after he was forced from power in 2012 following a year of nationwide protests against his three-decade rule.

The anti-government forces have been locked in battles against forces loyal to President Abedrabbo Mansour Hadi.

Since the air campaign began, fighting has flared in 15 of Yemen’s 22 provinces.

The coalition said Saturday it had conducted 1,200 strikes since March 26 and neutralised the air and missile capabilities of the anti-government forces in the air war which is accompanied by a naval blockade.

The campaign was launched as the rebels closed in on Hadi’s refuge in Aden, but when fighting encroached on the city, the president escaped to Saudi Arabia.

In a move that triggered speculation on social media about possible motives, Hadi’s entourage said he appointed Prime Minister Khaled Bahah as vice-president.

Raids were also conducted around Sanaa, and Huthi gatherings were targeted in both the central province of Ibb and farther east in Marib.

The Huthis have won support from renegade soldiers loyal to ex-president Saleh, but on Sunday soldiers from two brigades in Marib joined the ranks of the pro-Hadi fighters, a tribal chief said.

In Shabwa, tribesmen seized the base and arms of a rebel brigade, before clashing with other renegade troops and forcing them to surrender their weapons.

Al-Qaeda militants have taken advantage of the insecurity to seize Mukalla, the capital of Hadramawt province.

US Defence Secretary Ashton Carter acknowledged last week that Al-Qaeda was making gains and the fighting in Yemen was complicating counter-terrorism efforts but vowed they would go on.

The International Committee of the Red Cross flew more than 35 tonnes of medical aid and equipment into Sanaa on Saturday, after the first aid deliveries Friday organised by the Red Cross and UN.

Russia said its navy evacuated 308 people of various nationalities from Aden as the International Organization for Migration said more than 16,000 foreign nationals are stranded in Yemen.

The UN said at least 900 people had arrived in the Horn of Africa from the conflict-riven country in the past 10 days, most of them Somalis, but also Yemenis.

Coalition spokesman Brigadier General Ahmed al-Assiri accused the rebels of “trying to take the battle into Saudi territory… to ease pressure on their leaders.”