Home Sports Riders have near miss with TGV 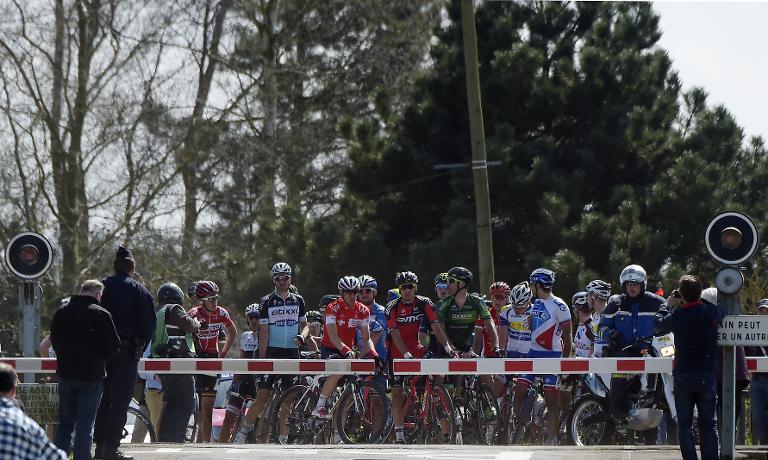 Several riders had a near miss crossing a railway line after the safety barriers had come down during Sunday’s Paris-Roubaix one-day classic cycle race.

A TGV (high speed train) passed a few seconds later, although by that point a police motorcycle was controlling the pass and had stopped the remnants of the peloton.

One rider from the Belgian Lotto team was clipped by a barrier which came down as the peloton was passing, about 87 kilometres from the end of the prestigious Hell of the North cobbled classic.

Several riders decided to cross anyway before the train came, against race rules, before a policeman stopped the rest.

Once the train had passed they continued normally and rejoined the riders ahead, who had been slowed down by race organisers to wait for those delayed.

“It wasn’t possible for the leading riders to stop sufficiently safely,” said Guy Dobbelaere, president of the jury of race commissioners.

“The peloton was 10 metres away when the barrier started to close.

“By neutralising the race for a few moments to not penalise those who stopped, we respected the spirit of the rule.

“In theory, those who pass when the barrier is down are thrown out of the race.

“This time, that would have been unjust in respect of those riders who weren’t identified.”

Back in 2006, three riders who were chasing a lone breakaway by eventual winner Fabian Cancellara were disqualified after crossing a railway line after the barrier was down.

Belgians Peter Van Petegem and Leif Hoste, as well as Vladimir Gusev from Russia, were fighting for the minor placings behind the Swiss star.

But that time, the barrier was already down when they arrived, around 10km from the end.