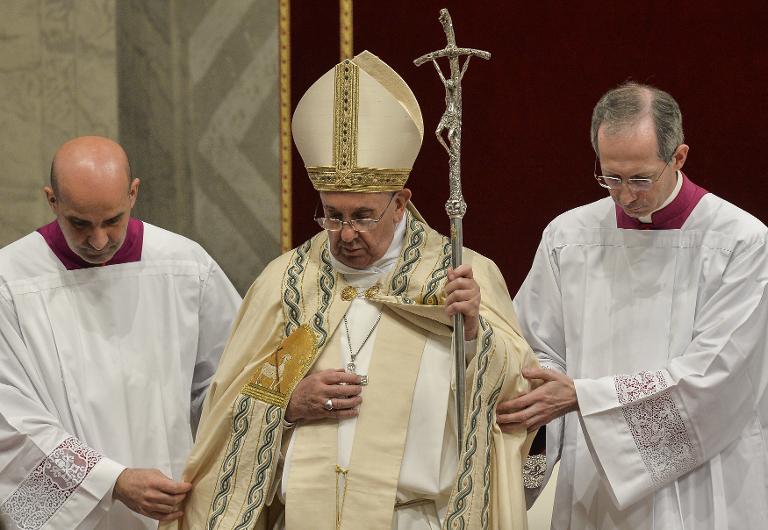 Pope Francis uttered the word “genocide” on Sunday to describe the mass murder of Armenians 100 years ago, sparking fury from Turkey which slammed the term as “far from historical reality”.

In a solemn mass in Saint Peter’s Basilica to mark the centenary of the Ottoman killings of Armenians, Francis said the murders were “widely considered ‘the first genocide of the 20th century’,” quoting a statement signed by Pope John Paul II and the Armenian patriarch in 2001.

Many historians describe the World War I slaughter as the 20th century’s first genocide, but Turkey vehemently denies the accusations.

Turkish Prime Minister Ahmet Davutoglu lashed out at Francis for “inappropriate” and “one-sided” comments, saying that “to read these sorrows in a one-sided way is inappropriate for the pope and the authority that he holds.”

A furious Ankara said it was recalling its ambassador to the Vatican, Mehmet Pacaci, for consultations.

“The pope’s statement, which is far from the legal and historical reality, cannot be accepted,” Turkish Foreign Minister Mevlut Cavusoglu said on Twitter.

“Religious authorities are not the places to incite resentment and hatred with baseless allegations,” he added.

While Francis did not use his own words to describe the killings as genocide, it was the first time the term was spoken aloud in connection with Armenia by a head of the Roman Catholic Church in Saint Peter’s Basilica.

“It was a very courageous act to repeat clearly that it was a genocide,” Vatican expert Marco Tosatti told AFP.

“By quoting John Paul II, he strengthened the Church’s position, making it clear where it stands on the issue,” he added.

The Argentine pope described the “immense and senseless slaughter” and spoke of the duty to “honour their memory, for whenever memory fades, it means that evil allows wounds to fester.”

The 78-year-old head of the Roman Catholic Church had been under pressure to use the term “genocide” publicly to describe the slaughter, despite the risk of alienating an important ally in the fight against radical Islam.

Before becoming pope, Jorge Bergoglio used the word several times in events marking the mass murders, calling on Turkey to recognise the killings as such.

As pope, Francis is said to have used it once during a private audience in 2013 — but even that sparked an outraged reaction from Turkey.

Armenians say up to 1.5 million of their kin were killed between 1915 and 1917 as the Ottoman Empire was falling apart, and have long sought to win international recognition of the massacres as genocide.

But Turkey rejects the claims, arguing that 300,000 to 500,000 Armenians and as many Turks died in civil strife when Armenians rose up against their Ottoman rulers and sided with invading Russian troops.

More than 20 nations, including France and Russia, recognise the killings as genocide.

Vatican expert John Allen said ahead of the mass that the “truly bold” thing for Francis to do was “show restraint” — something the pope may feel he has achieved by uttering the word “genocide” but only while quoting his Polish predecessor.

When Francis visited Turkey, President Recep Tayyip Erdogan offered the pontiff a pact under which he would defend Christians in the Middle East in exchange for the Church tackling Islamophobia in the West, Allen said — describing it as “a potential game-changer”.

In 2014, Erdogan, then premier, offered condolences for the mass killings for the first time, but the country still blames unrest and famine for many of the deaths.

The pope said Sunday the other two genocides of the 20th century were “perpetrated by Nazism and Stalinism”, before pointing to more recent mass killings in Cambodia, Rwanda, Burundi and Bosnia.

“It seems that humanity is incapable of putting a halt to the shedding of innocent blood,” he said.

The Armenian victims a century ago were Christian and although the killings were not openly driven by religious motives, the pontiff drew comparisons with modern Christian refugees fleeing Islamic militants.

He referred once again to the modern day as “a time of war, a third world war which is being fought piecemeal”, and evoked the “muffled and forgotten cry” of those “decapitated, crucified, burned alive, or forced to leave their homeland.”

“Today too we are experiencing a sort of genocide created by general and collective indifference,” he said.

Vatican watcher Marco Politi said the address was typical of a pope who “uses language without excessive diplomatic cares” and whose aim was to “stimulate the international community” to intervene in modern-day persecutions.