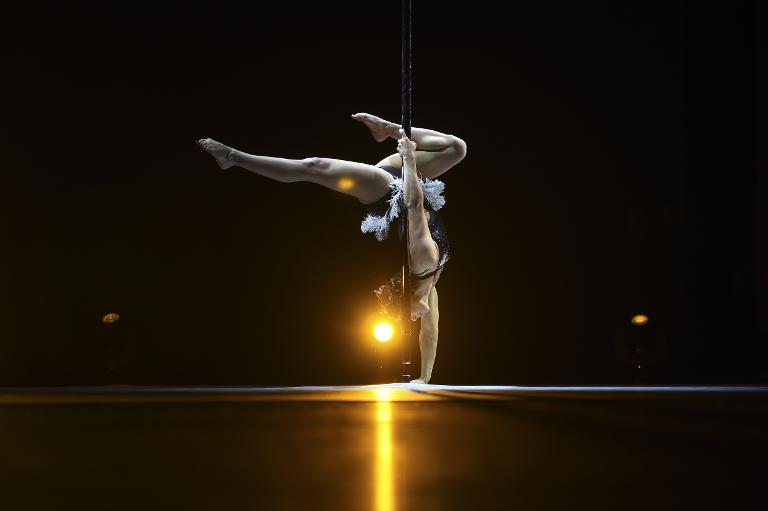 More than 50 limber and lithe athletes representing over ten countries on four continents — some dressed as Roman centurions, wolves and sharks — hoped their routines could help sever the sport’s association with seedy strip clubs.

“We call it ‘pole fitness’ to get away from the negative connotations… it’s more part of the sports industry than stripping industry,” said Kat Bailey of Britain.

Before jerking her way up a steel pole in a spangly silver and red polka-dot leotard to thunderous applause, she added: “I would totally support pole as an Olympic sport.”

Chilean contestant Felipe Mendoza Perez — one of more than a dozen men competing — wowed the audience by threading his legs around the pole like a dressmaker working a needle over cloth, in a musical routine lasting several minutes.

In a stroke of pure showmanship he ripped off a black cloth mask, before hanging off the pole with his legs in a wide splits position.

“People think it’s so easy but it’s so difficult,” he said after catching his breath backstage.

Emmanuel Ignacio of the Phillipines, who wore a floppy top-hat over his black-and-white painted face, added: “Pole fitness has evolved so much… in a few years who knows, it could become an Olympic sport.”

Russian competitor Kristian Lebedev took to the stage in crimson cape and Roman-style outfit complete with a toy sword and red-crested helmet.

Most competitors held themselves upside down or horizontal in poses demanding near-impossible displays of strength, but Lebedev’s backwards somersaults from the pole to the ground stole the loudest gasps from the audience.

“But its a hard sport, an extreme one. Now people understand that.”

China has emerged over the last decade as a center for the discipline, but Chinese competitors said they had faced cultural conservatism while chasing their pole dance dreams.

“My parents are farmers in the countryside… I learned for four years, and the first three years they did not know, because I was working in a gym and I learned it secretly,” said 2013 Chinese Pole Dance Champion Fang Yi.

But now “many people see it as an sport. We are working hard at it, and hope one day it will be in the Olympics,” the 29 year-old added.

Pole dancers have launched several petitions calling for Olympic authorities to add their sport to the next Games — so far without success.

Serious competitors insist that the sport be referred to as “pole fitness” or “vertical fitness” rather than pole dancing, and claim that the discipline has ancient roots in Chinese and Indian acrobatics.

“In recent years, dancers have to be more athletic… A few years ago, it was more of a sexual thing, but now itâ€™s more of an athletic thing,” said Chinese dancer Sun Wenzhu, as she painted a wolf mask, part of a get-up which won “best costume,” on Sunday.

As part of her doubles performance, she ripped off the costume to reveal a pink bikini, before pulling her partner into the air while hanging from the pole.

The scale of the competition reflected the growing appeal of pole dancing as a fitness aid over the last decade — with thousands of clubs estimated to have opened worldwide, including more than 500 in the United States alone.

Competitors who made the journey to China this year included the British current World champions ‘Bendy’ Kate Czepulkowski and Sam Willis, the event’s organisers said.

Hotly tipped for this year’s championship was the aptly-named Russian female contestant Polina Volchek, who goes by the moniker “Pink Puma”, they added.

Perez of Chile summed up the general mood, observing: “To me pole is the number one sport. It’s gymnastics, art, yoga, Pilates, everything in one discipline.”