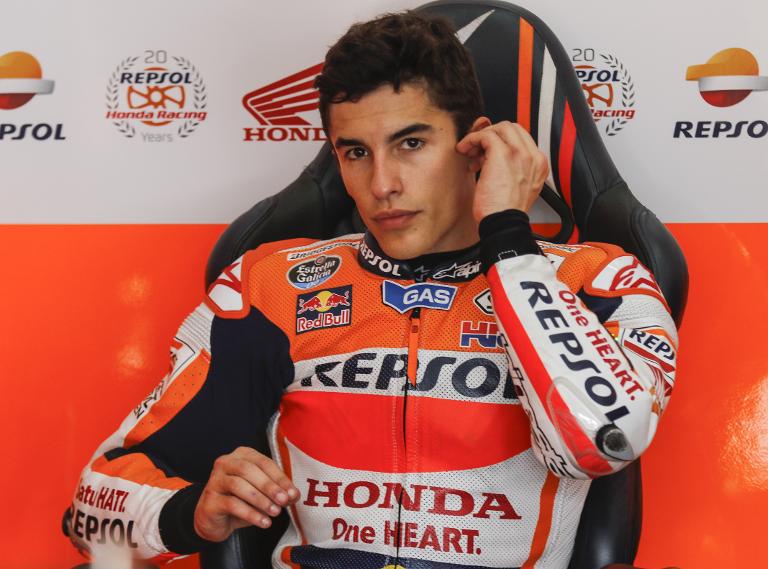 World champion Marc Marquez of Spain won the Grand Prix of the Americas for the third straight year to get his 2015 MotoGP campaign on track.

After a disappointing fifth-place finish in the season-opening race in Qatar, Marquez rebounded at the Texas track, where he won for the first time in the elite MotoGP class.

A day after capturing pole position with dramatic late-session heroics, the 22-year-old Honda rider was in dominant form.

He finished more than 2.3 seconds ahead of Ducati rider Andrea Dovizioso, with nine-time world champion Valentino Rossi third on a Yamaha.

Rossi, the nine-time world champion who opened the season with a win in Qatar, remained atop the standings with 41 points, followed by Dovizioso on 40 and Marquez on 36.

In a race delayed as organizers dealt with patches of water on the track, Dovizioso seized the initiative at the start, powering to the first-turn lead ahead of Rossi and Marquez.

The leaders were tightly bunched when Marquez made his move heading into the back straight on lap four.

His move past Dovizioso was quickly answered by the Ducati rider, but Marquez wouldn’t be denied and at the end of the straight he again maneuvered past to take the lead for good.

From there, Marquez was never threatened, stretching his lead to as much as four seconds as Rossi and Dovizioso dueled for second behind him.

“I decided to keep calm in the early laps to try to understand the situation well, and when I started to find a feeling similar to practice, I decided to push the pace a bit,” Marquez said.

“That was when I was able to open up a gap.”

Meanwhile, a fortnight after their tense battle in Qatar, Rossi and Dovizioso were battling for second — a contest that included a near-collision as Rossi made a bold move to get past at the track’s 12th turn.

“Dovi said to me that we risked a lot overtaking in Turn 12,” Rossi said.

“From the bike, I didn’t feel it and I thought we had some margin. We passed each other very closely, but there was enough space.”

Dovizioso wasn’t finished, however, and as Rossi began to experience trouble with tyre wear, the Ducati rider regained second place.

After six or seven laps of pushing a lot, I had to ride very smooth,” said Rossi, who was nevertheless pleased to put his Yamaha on the podium at a circuit where they had previously failed to shine.

“I’m happy about the weekend, because getting onto the podium is a good objective when coming here,” Rossi said.

“On paper, this track is the worst for our bike.”

Rossi’s teammate Jorge Lorenzo left it late, overtaking the Ducati of Andrea Iannone with only three laps remaining to snatch fourth place from the Italian, with Monster Tech 3 Yamaha’s Bradley Smith rounding out the top six.

In the Moto2 race, Speed Up Racing’s Sam Lowes of Britain shook off the effects of big crashes in practice and qualifying to win his first race at the level.

Lowes overtook Ajo Motorsport’s Johann Zarco to lead with six laps to go. As Zarco and Xavier Simeon tried to reel him back in, they made contact, with the latter crashing.

Zarco recovered to finish second ahead of rookie Alex Rins on the Paginas Amarillas HP40 Kalex.

British Honda rider Danny Kent won the Moto3 race, his first win of 2015 and the third of his career.

Kent, 21, started from pole and held off 15-year-old French sensation Fabio Quartararo, who was making just his second start at this level. Spain’s Efren Vazquez was third.