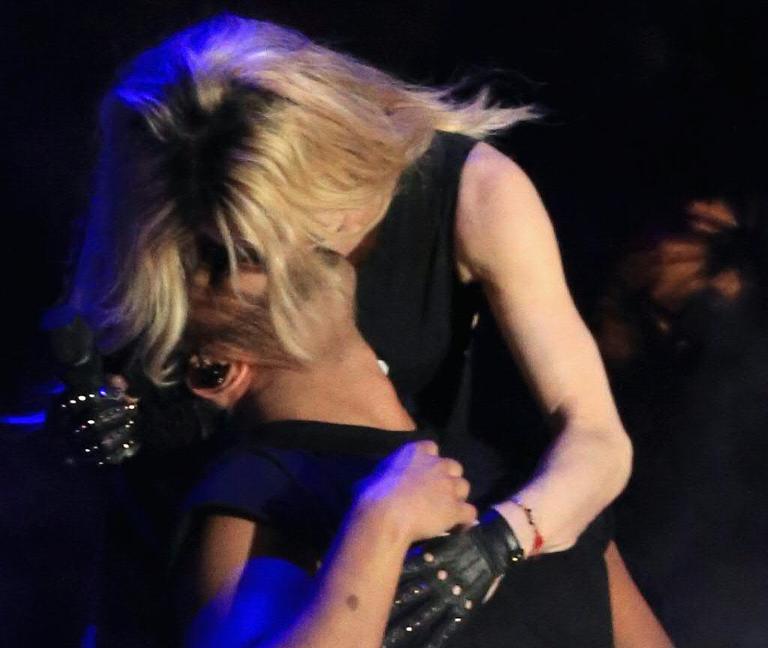 Madonna startled an audience of tens of thousands by making out with the rapper Drake in an unexpected climax to the Coachella music festival.

The pop superstar was not scheduled to appear at the three-day festival in the California desert but walked on stage Sunday night as Drake performed a song named after her — in which the rapper boasts that he can make a girl as big as Madonna if she gives in to his advances.

Madonna performed two of her own songs including “Human Nature” before bending over a seated Drake for a prolonged, full-tongue kiss as her long, blonde locks fell upon him.

“I’m Madonna!” she declared as she walked off, an allusion to one of the new songs by the singer who drew headlines a decade ago for a televised kiss with Britney Spears.

Madonna’s intervention brought new life to a performance that might otherwise have been forgotten by Drake, who — in a rarity for the tightly run festival — started nearly half an hour late.

The Toronto rapper opened with pyrotechnics and “Legend,” his swaggering account of his own fame, and informed the crowd that he had just spoken to his mother, who urged him to deliver his best performance.

Madonna and Drake’s locked lips were not the only sensual scene Sunday at Coachella, which is as renowned for skimpy clothing in the desert heat as it is for its trendsetting musical selection.

Florence Welch, singer of the soulful British indie band Florence and the Machine, invited fans to remove her clothing until she pranced in the crowd with only a bra.

Among the emerging artists who played on Coachella’s final day were the Danish electropop singer Mo, who overcame technical problems to deliver an impassioned set in which she twice went crowd-surfing, and the Welsh-born pop singer Marina and the Diamonds, who had a giant crowd singing along to her advice song, “How To Be a Heartbreaker.”

Belgian singer Stromae, a sensation in the French-speaking world, delivered a riveting performance of his danceable yet intelligent pop tunes.

In an unusual scene for a non-English-language artist, hundreds of US fans sang along as best they could with Stromae on songs such as “Papaoutai” with its refrain — “Papa, ou t’es,” or “Where are you, Dad?”

The song, which like much of Stromae’s work brings in African musical influences, revolves around his absent father who died in the 1994 Rwandan genocide.

Stromae showed a flair akin to theater acting as he kept the crowd engaged over a 50-minute set. For “Formidable,” about a boozy catharsis after heartbreak, Stromae pretended to be stumbling drunk and had his bandmates carry him off stage.

Stromae — whose album “Racine Carree” was the top seller in France in 2013 and again in 2014 — has been rising in popularity in the United States and will play at New York’s Madison Square Garden in October.

The 30-year-old took in stride the language barrier. When he asked the crowd whether they understood French and found out they didn’t, he said, “Then let’s speak both languages.”

But he only uttered one word of French outside his songs — “sante,” or “cheers,” as he raised a glass to the crowd.

Rebelling against the frivolity that surrounds so much of Coachella, Conor Oberst’s reunited punk band the Desaparecidos brought to the festival an ear-splitting rage on the course of modern America.

Oberst, best known as the force behind Bright Eyes, emerged in the late 1990s as a beacon of emotional awareness for a generation of sensitive youth.

But as the frontman of the Desaparecidos, he also delivered a blistering critique of consumerism and Bush-era foreign policy on the band’s 2002 album “Read Music/Speak Spanish.”

The Desaparecidos will release a second album, “Payola,” in June that updates the anger by a decade. Songs include “MariKKKopa,” a furious indictment of Arizona’s campaigns against undocumented immigrants, and “Anonymous,” a tribute to jailed WikiLeaks source Chelsea Manning.

The Desaparecidos played from both albums at Coachella, although the uninitiated likely missed the lyrics as the band defiantly cranked up the bass so high that many in the audience stuck fingers in their ears.

Oberst also offered one of the few allusions at Coachella to California’s drought — easily forgotten amid the festival’s green lawns and water spray guns — as he dedicated his final song to the desert area’s “useless golf courses.”