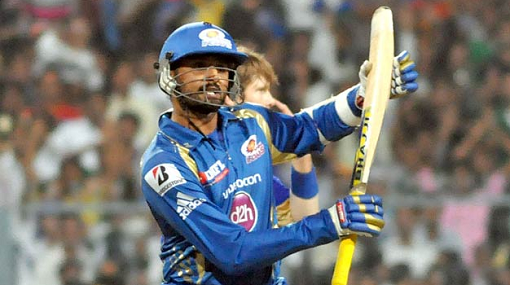 Mumbai: Harbhajan SinghÂ played a blinder of an innings to single-handedly takeÂ MumbaiÂ Indians to striking distance of a dramatic victory with a stunning 24-ball 64 before his side lost theirÂ IPLÂ cricket match against Kings XIÂ PunjabÂ by 18 runs in an exciting contest in Mumbai on Sunday.Â

The out of favourÂ IndiaÂ player, Harbhajan came out in the 14th over when his side were down 59 for six and the game as good as gone for Mumbai but he turned the match on its head after what appeared to be a lopsided contest at one stage.Â

Mumbai were 32 for four after 10 overs and the asking rate had shot up to nearly 20 an over when Harbhajan came out but the feisty off-spinner made a match out of the contest and his batting pyrotechnics entertained theÂ Wankhedecrowd who had remained silent for the first part of the MI run chase.Â

Harbhajan, who hit five fours and six sixes in his sensational knock, was out in the penultimate ball and MI ended at 159 for seven with Jagadeesha Suchith remaining not out on 34 from 21 deliveries. Suchith and Harbhajan stitched exactly 100 runs for the seventh wicket from just 37 balls in a breathtaking display of strokeplay though MI ended as the losing side.Â

Earlier, Kings XI rattled up a combative total of 177 for five, thanks mainly to a brilliant unbeaten 61 from 32 balls by skipper George Bailey and useful contributions from openers Murali Vijay (35), Virender Sehwag (36) and David Miller (24) after they were put in to bat.Â

In their runs chase, MI looked in dire straits after losing their top four wickets cheaply, including skipper and leading hope Rohit Sharma (0), and then slumped to 59 for six before Harbhajan, after an impressive stint with the ball, smashed the Kings XI bowling around to bring down the margin of defeat.Â

This was Mumbai’s second defeat after losing their lung-opener to hosts and defending champions Kolkata Knight Riders on April 8. It was also MI’s first defeat against Kings XI at home after two wins in the last two seasons and eighth defeat overall in 15 games in the tournament’s history.Â

For Kings XI, this was their first win in the tournament after losing their opening match by 26 runs against Rajasthan Royals in Pune on April 10.