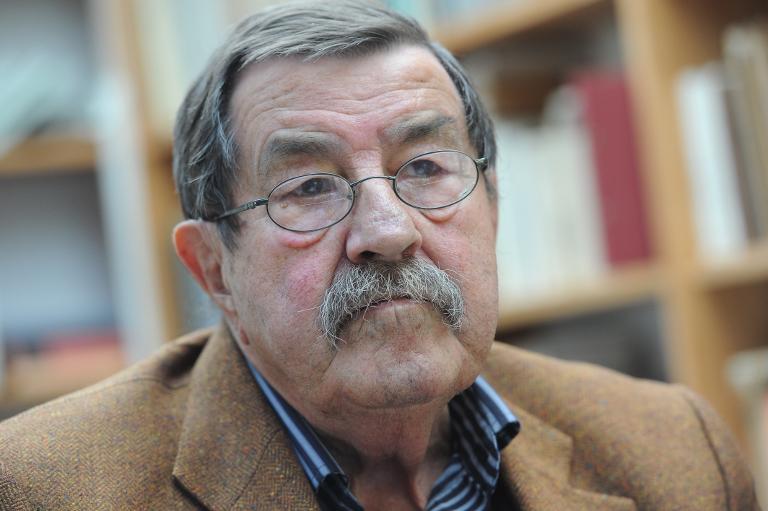 Germany’s Nobel-winning author, Gunter Grass, who acted as a moral compass for many in the postwar nation but later provoked criticism over his own World War II past, died Monday aged 87, his publishers said.

The writer, one of Germany’s most influential if controversial intellectual figures, died in a hospital in the northern city of Luebeck, the Steidl publishing house said.

Grass achieved world fame with his debut and best-known novel “The Tin Drum” in 1959, quickly followed by “Cat and Mouse” and “Dog Years”, all dealing with the rise of Nazism in his city of birth, Danzig, now Gdansk in Poland.

He pressed Germany for decades to face up to its Nazi past, winning the Nobel Prize for Literature in 1999, when the Swedish Academy said his “frolicsome black fables portray the forgotten face of history”.

Chancellor Angela Merkel led tributes to Grass, who was also a poet, playwright and sculptor, and was often seen puffing on his pipe, sporting his trademark walrus moustache.

Merkel said Grass had “accompanied and shaped Germany’s post-war history with his artistic as well as his social and political engagement like only a few”, according to her spokesman.

But Grass also shocked his admirers and provoked an outcry in 2006 when he revealed, six decades after World War II, that he had been called up into Hitler’s notorious Waffen SS at the age of 17.

He put his more than 60-year silence over his Waffen SS conscription down to a sense of “shame” and said he wanted to use his memoirs to fully explain his past.

“What I accepted with pride in my younger years I wanted to keep quiet about after the war because of my growing shame,” he wrote in the 2006 autobiography “Peeling the Onion”.

In 2012, he courted controversy again — and was declared persona non grata by Israel — after publishing a prose-poem, “What Must Be Said”, that painted Israel as the Middle East’s biggest threat to peace.

In it, Grass voiced fears that a nuclear-armed Israel would mount a “first strike” against Iran and wipe out its people, prompting Israeli Prime Minister Benjamin Netanyahu to slam the poem as “shameful”.

Grass, a longtime leftist activist, said he was particularly stung by the widespread accusations of anti-Semitism against him in the German media.

He also said he regretted not specifying his criticism was targeted at the Israeli government and not the country as a whole.

President Joachim Gauck said Grass’ works reflected the “great hopes and mistakes, the fears and desires of whole generations”, while Foreign Minister Frank-Walter Steinmeier said the country had lost one of its greats.

“Grass was the father figure for the thinking and writing of a Germany that was coming of age,” he said in a statement.

British-Indian writer Salman Rushdie tweeted that the news of Grass’ death was “very sad”. “A true giant, inspiration, and friend. Drum for him, little Oskar,” he wrote in a tweet, referring to the main character in “The Tin Drum”.

Austrian Nobel literature prize laureate Elfriede Jelinek stressed the early influence Grass had had on her, in comments to the Austria Press Agency.

Swedish Academy member Per Waestberg told AFP that Grass was “the greatest German writer of the second half of the 20th century” adding that his 1999 Nobel had aimed to “crown” the century.

Grass’ works have a strong political dimension and are considered part of the postwar German literary movement dealing with “coming to terms with the past”.

During World War II, he was wounded and taken prisoner by the Allies.

His Danzig Trilogy is set in the ethnically-mixed region of his childhood. Danzig was handed to Poland after the war, when its ethnic German population fled or were expelled.

“The Tin Drum”, his magic realism text about Oskar Matzerath, who decides never to grow up, was adapted into an Oscar-winning film by Volker Schloendorff.

Grass was also not averse to stirring controversy beyond his nation’s borders, such as when he likened the cartoons of the Prophet Mohammed that appeared in 2005 in a Danish newspaper to Nazi caricatures of Jews.

Grass was born on October 16, 1927 in the Baltic port city of Danzig to parents who had a grocery shop.

Equally critical of 1960s consumerism and the revolutionary violence that it spawned among some German youth, Grass was a dedicated pacifist, opposing the installation of nuclear missiles on German soil, and a critical supporter of the Social Democratic Party.

He was also dubious of what he saw as an unseemly rush to unite the two parts of Germany.

The cultural foundation in Luebeck said Grass died from a “sudden serious illness” and that his family was with him at the time.