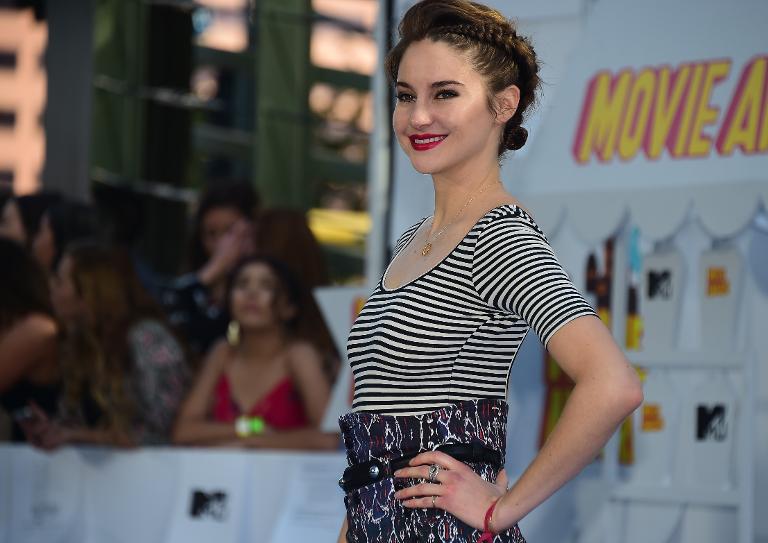 Teen tear-jerker “The Fault in Our Stars” and “American Sniper” actor Bradley Cooper were the big winners at the MTV Movie Awards in Los Angeles.

Cooper took Best Male Performance for “Sniper” — Clint Eastwood’s Iraq war drama which was nominated for six Oscars and was a massive hit at the North American box office.

Shailene Woodley took the honor in the female category — as well as the special MTV Trailblazer Award — for her turn in “The Fault in Our Stars” as a teenager with cancer who falls in love with a fellow young cancer sufferer (Ansel Elgort) at a support group.

The duo’s powerful on-screen chemistry was recognized as they took home the award for Best Kiss and the film, which had cinema-goers in floods of tears, was named Movie Of The Year.

Veteran Meryl Streep won the Best Villain prize for “Into the Woods”, while other offbeat awards included Best Fight, which went to Will Poulter and Dylan O’Brien for “The Maze Runner”.

Zac Efron was honored for Best Shirtless Performance in “Neighbors” at the awards, which take a sideways look at the film industry and fall outside the traditional Hollywood awards season.

Efron and Dave Franco were named Best Duo for the comedy, which received decidedly mixed reviews from film critics on release.

Robert Downey Jr. was recognized for his achievements down the decades with the Generation Award.

The actor received the prize from Scarlett Johansson, Mark Ruffalo, Chris Hemsworth and Jeremy Renner, some of his fellow cast of “The Avengers: Age of Ultron”, which is about to be released.

“In the 34 years that have passed since the birth of MTV, I’ve grown up, I’ve struggled, I’ve failed. I’ve partied way too much,” joked Downey, 50, clutching the award, which resembles a box of popcorn.

Sporting a pair of sunglasses, he then turned serious, adding: “I begged for second chances and literally clawed my way to the top.”

As is usual for any awards night, many were more interested in what the great and good of Hollywood were showcasing on the red carpet.

Johansson paraded in a pink jumpsuit that matched her rosy cheeks and lips, while Jennifer Lopez was striking in an all-black tuxedo-miniskirt combo and high heels that left little to the imagination.

Model and actress Cara Delevingne also stood out in a purple minidress complete with lace and dramatic draping.