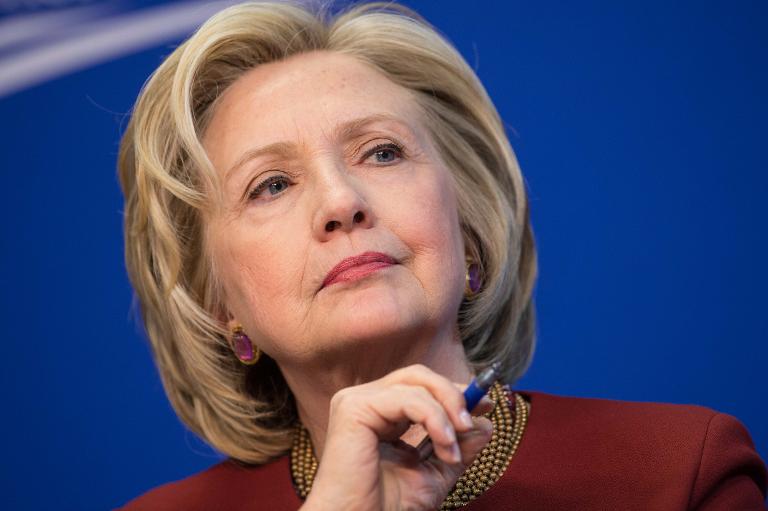 Casting herself as a champion of “everyday Americans,” Hillary Clinton on Sunday finally launched her campaign to become the first female tenant of the White House.

Long assumed to be the front-runner for her Democratic Party’s presidential nomination, Clinton’s formal entry into the race unleashes her fundraising machine and empowers her to parry Republican attacks.

Seven years after her bitter nomination defeat to Barack Obama, the former secretary of state and first lady jumps into the race still the overwhelming Democratic favorite, as her Republican rivals gird for a bruising primary.

“I’m running for president,” a beaming Clinton said in a slickly produced video that quickly went viral after it was posted on her revamped campaign website Sunday.

“Everyday Americans need a champion, and I want to be that champion,” she said in a two-minute clip featuring, upbeat middle-class families from a variety of backgrounds sharing their aspirations.

Her nascent campaign said Clinton will spend the next six to eight weeks in a “ramp up” period, building a grass-roots organization and “engaging directly with voters.”

Her first major rally and the speech that kicks off her campaign will not take place until May, her team said.

But Clinton stressed that “I’m hitting the trail to earn your vote.”

Her campaign said she will head to Iowa on Tuesday for small roundtable conversations “about how to make the economy work so everyday Americans and their families can actually get ahead and stay ahead.”

The announcement will no doubt trigger a donation deluge from supporters who have long waited for her to officially enter the race, a move that would allow them to contribute directly to her 2016 election effort.

But it also triggered a harsh Republican response, including from the Republican National Committee which said Clinton “has left a trail of secrecy, scandal, and failed policies that can’t be erased from voters’ minds.”

“We must do better than Hillary,” tweeted former Florida governor Jeb Bush, just one minute after Clinton posted her own announcement to her 3.2 million Twitter followers, in a foreshadowing of the intense back-and-forth expected to play out on social media in the run up to the November 2016 election.

On Saturday she earned praise from Obama, who said she would be “an excellent president.”

But experts warn she will have to tread a fine line in how closely she aligns herself with the incumbent, whose approval ratings have lingered below 50 percent for two years.

The soft rollout — a folksy but up-beat video, low-key small gatherings with heartland voters — marks a deviation from the Clinton Inc. juggernaut that ultimately failed in 2008.

The one-time senator and wife of former president Bill Clinton leads opinion polls among Democrats, some 60 percent of whom say they would vote for her in the primaries, according to website RealClearPolitics.

A humble approach may ease doubts about Clinton raised in recent weeks, after it was revealed she used a private email account while secretary of state from 2009 to 2013 and that her family philanthropic foundation accepted millions of dollars from foreign governments.

But she will have to brace for uncomfortable questions about the issues, as well as the various scandals in the Clintons’ past, from voters.

Clinton, who has been in America’s political spotlight for a quarter-century, has endured heavy criticism from Republicans, and launching her campaign gives her a platform to counter their punches.

Senator Rand Paul, who announced last week he is running for president, released on Sunday what is perhaps the first attack ad of the 2016 cycle, saying Clinton “represents the worst of the Washington machine: the arrogance of power, corruption and cover-up, conflicts of interest and failed leadership with tragic consequences.”

Jeb Bush teased his own expected campaign rollout, with the son and brother of two former presidents releasing a video Sunday saying he would present his policy proposals “in the coming weeks and months.”

On the Democratic side, Vice President Joe Biden and former Maryland governor Martin O’Malley have openly expressed interest in running, but the Clinton announcement has met no substantial challenge yet from within her party.

“She is going to break that glass ceiling once and for all,” Mikulski said.

Clinton, who has highlighted her status as a new grandmother, leads against her GOP rivals in nearly all polls, but famed political prognosticator Nate Silver on Sunday called the 2016 election a “toss-up.”