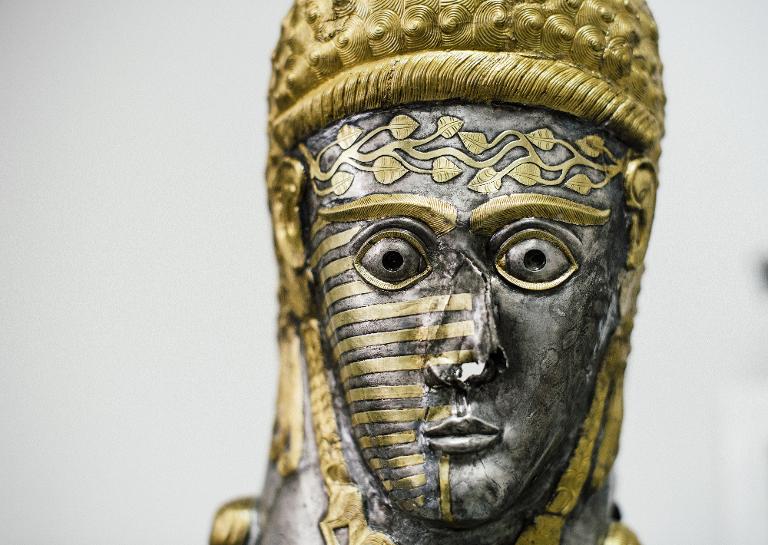 Exquisitely crafted gold, silver and bronze objects will go on display at the Louvre museum in Paris this week, giving visitors a rare glimpse of the ancient Thracian culture that produced them.

Many stories still remain untold about this refined civilisation whose citizens included Orpheus, the mythical son of a Thracian king, and legendary gladiator Spartacus who led an uprising against Rome.

One of the exhibition highlights is the Panagyurishte ritual beverage set — the most prized possession of these ancient people who inhabited the Balkan peninsula from the 2nd millennium BC to the 3rd century AD.

Made of 23-carat gold, it consists of a phial, an amphora with centaur-shaped handles and seven rhytons, and drinking vessels carved in the form of women’s and animal heads, with a total weight of six kilos (13 pounds).

Since Communist times, Bulgaria has been exhibiting gold and silver Thracian treasures found on its territory in museums around the world, from Mexico to India and Japan.

But “it won’t just be the umpteenth exhibition in France of Thracian gold: it will offer the general public an opportunity to gain broader insight into this culture,” said Francoise Gaultier, the director of Louvre’s Department of Greek, Etruscan, and Roman Antiquities.

Beyond the stunning wares, this latest exhibition aims to paint a broader picture of the lifestyle of the Thracians by showing the tools used to carve the pieces.

It will also showcase for the first time the exact replicas of four Thracian tombs from central Bulgaria, where some of the precious finds were uncovered.

One of them contained another centrepiece of the exhibition — the life-size bronze head of King Seuthes III with eyes made of alabaster and a glass paste lending extreme liveliness to the king’s sculptured face.

This ruler of the Odrysian kingdom had been buried together with his gold wreath, headpiece, horse ornaments, drinking cups and even glass playing dice.

In addition to unveiling the spectacular craft behind Thrace’s treasures, the exhibition aims to shed a light on famous Thracian rulers.

“What we want to do is to present a historical and archeological synthesis that allows us to go further, to give substance, and offers a global perspective on the history of the Odrysian kingdom from 479 to 278 BC,” Baralis said.

“We want to show that the Thracians, as actors of the ancient world, were as influential as the Greek, the Macedonians or the Romans.”

The exhibition will also provide an opportunity to Bulgaria to bolster its image as one of the three European countries with the richest cultural heritage after Greece and Italy.

“The exhibition at the Louvre will offer us a trampoline for promoting cultural tourism,” said Tourism Minister Nikolina Angelkova.

Bulgaria is currently mostly known for its winter resorts and Black Sea beaches but according to the minister, it has a huge potential to attract new tourism to the dozens of reconstructed Thracian burial sites.