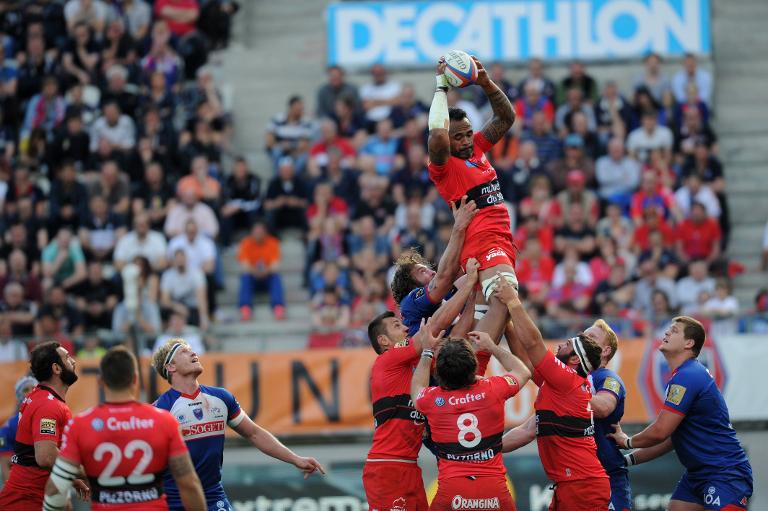 Defending champions Toulon returned to the Top 14 summit on Saturday while Clermont were upset at home to Oyonnax and Montpellier battled back to draw 24-24 at Racing-Metro.

Bernard Laporte’s Toulon, who take on Irish side Leinster in the European Champions Cup semi-finals next Saturday, picked up their fifth away victory as they overpowered Grenoble 35-24.

The win gives them 65 points and a three point lead on Clermont who came unstuck 11-10 at home to Oyonnax in one of the day’s surprise results.

Third-placed Stade Francais drew on Friday 19-19 at La Rochelle and fall four points off the pace.

Oyonnax are clinging to sixth place in the table and the final playoff spot and their victory was vital at Clermont as they stay three points above Montpellier.

“We knew that for them, it would be extremely complicated to prepare a home match between a European Champions Cup quarter-final and semi-final,” Oyonnax coach Christophe Urios said in reference to Clermont’s upcoming last-four clash against Saracens next Saturday.

“We prepared very well and then during the match we hung on and battled hard as well as being taking our opportunities.

“We’re happy to confirm our hard work with a victory and we showed today that even if it is not our main objective, we deserve our sixth place (in the table.” added Urios.

In other matches, French international scrum-half Jean-Marc Doussain scored a try with two minutes left as Toulouse stole victory from Bayonne 20-17 in a thriller at the Ernest-Wallon stadium.

Brive won a crucial relegation battle 22-20 at Lyon as the visitors remain rooted to the bottom while in the day’s final match, Castres held on for a desperate 22-20 victory over Bordeaux-Begles.

The win for second from bottom Castres rekindled their chances of avoiding the drop while the visitors, who began the day ninth, saw their playoff chances seriously compromised.

Clermont opened the scoring against Oyonnax, when Peceli Yato touched down and Brock James knocked over the conversion, but the visitors were resistant in the trenches for the rest of the match and eventually ground down the former French champions.

Montpellier came back from 14 points down to force a 24-24 draw as Racing squandered a golden chance to close ground on the leaders.

At Colombes, Racing were heading for victory and an offensive bonus point after dominating the match for long periods but Montpellier dug in and launched their comeback with 19 minutes to go.

Australian fly-half Ben Lucas booted over three pressure penalties sandwiched around a crucial try from Fijian international Timoci Nagusa, who appeared to break his arm just before crossing the line, as Jake White’s team kept up their bid for a playoff spot.

South African-born French international Antoine Claasen and scrum-half Maxime Machenaud both scored two tries for Racing but the French number nine was left distraught after his late foul led to the tying penalty.

Racing lie fourth, level on points with Toulouse, as the battle for fourth, fifth and sixth develops into a pressure cooker.

Pau meanwhile won promotion back to the Top 14 next season with a second division 31-5 victory over Montauban to lift the Pro D2 title.

“A title is always fabulous no matter what it is,” said Pau centre Damien Traille.

“You can have a long career and not win anything but it’s a great individual and collective satisfaction from the players who have worked so hard” added the French international.

On Friday, La Rochelle extended their unbeaten run to six matches as they battled title challengers Stade Francais to a draw.

The two points picked up by the visiting side from the capital did take them top of the table at least overnight.