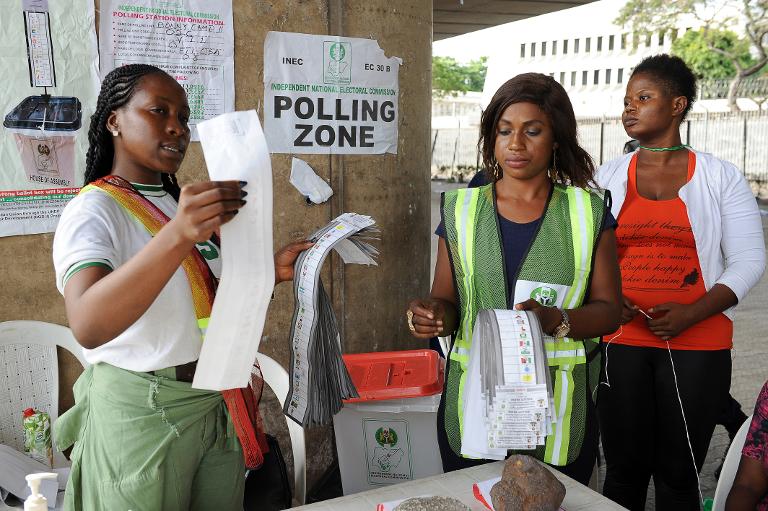 Results were expected to be announced from Sunday in Nigeria’s state governorship and local assembly polls, after voting wrapped up across the country.

A total of 29 governorship and deputy governorship positions from Nigeria’s 36 states are up for grabs and seats in all of the states’ legislatures.

Governors are influential figures in Africa’s most populous nation, with near-total control of their states and collective power at a national level to bolster or check the presidency.

The main opposition All Progressives Congress (APC) is seeking to build on its current control of 14 states after its candidate Muhammadu Buhari took the presidential race two weeks ago.

The Independent National Electoral Commission (INEC) on Saturday said it was broadly satisfied with the process, despite pockets of violence, vote-rigging claims and logistical problems.

Key states to watch in the governorship battle include megacity Lagos and the surrounding state of the same name, which has been in opposition control since the return to civilian rule in 1999.

PDP candidate Jimi Agbaje has mounted a strong campaign against the APC’s Akinwunmi Ambode, who is hoping to succeed governor Babatunde Fashola at the helm of Nigeria’s financial hub.

Fashola steps down after a maximum two, four-year terms during which he has strived to improve Lagos’ infrastructure and appeal as an investment centre but faced criticism over slum clearance.

All eyes will be on Rivers in the oil-producing south because of tense personal rivalries between outgoing governor Rotimi Amaechi and Jonathan after the former’s defection to the APC in 2013.

On Saturday, APC members alleged rigging on the part of the PDP and the state was tense, with a heavy security presence, in anticipation of disputed results.

Experts believe the opposition could add to its tally of governors with the central state of Plateau as well as Kaduna in the north.

There has been dissatisfaction with outgoing PDP governor Jonah Jang in Plateau, while Kaduna, a religiously and ethnically mixed state, voted nearly 70 percent in favour of Buhari two weeks ago.

Taraba in the east is being watched because of the prospect that it could return a female governor for the first time in Nigeria’s history in the shape of Aisha Jummai Al-Hassan.

But full state results were not expected until Sunday morning at the earliest, with official announcements made locally by each state’s resident electoral commissioner.

Jonathan made history two weeks ago by conceding the election before the final results were announced, winning plaudits for his statesmanship and for defusing the threat of violence.

Information Minister Patricia Akwashiki on Saturday urged candidates in the local polls to follow his example, with post-poll violence having hit previous elections in Nigeria.

“If our president was able to walk away from an election and accept defeat, everybody, the winner and the loser, should be able to accept that the people’s will is what will carry the day,” she was quoted as saying by local media.