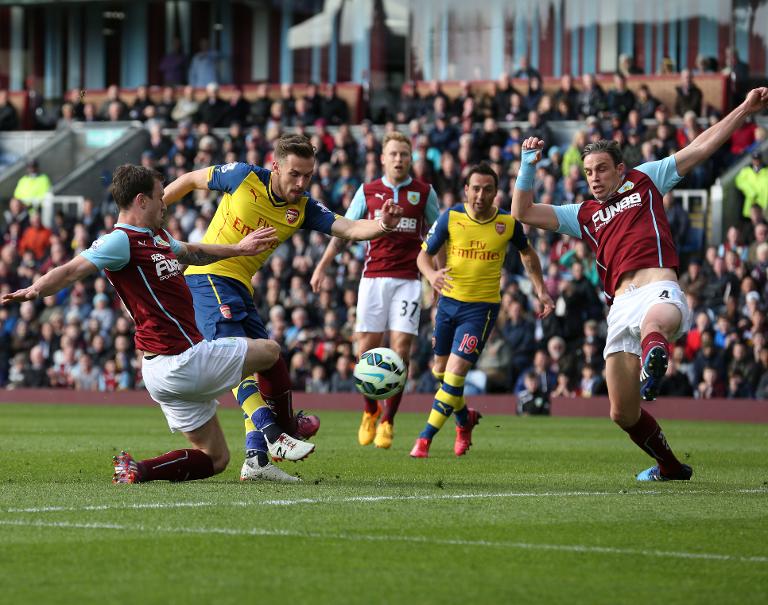 Aaron Ramsey scored the only goal of the game as Arsenal gave Premier League leaders Chelsea food for thought with a scrappy 1-0 win at second-bottom Burnley on Saturday.

The Welsh midfielder struck in the 12th minute at Turf Moor, slicing the ball into the roof of the net from close range after team-mates Alexis Sanchez and Mesut Ozil had seen efforts repelled.

“It was a battling performance more than a fluid performance, and that was because Burnley are perfectly organised and very fit to keep their shape for the full 90 minutes,” said Wenger.

The Loftus Road trip is the first of two games in hand for Chelsea, but with matches against Manchester United and Arsenal also on the horizon for Jose Mourinho’s side, Wenger’s men may yet have a word to say in the title race.

They failed to convince against Burnley, but have now won eight league games in succession for the first time since the 2003-04 ‘Invincibles’ season and seem assured of a Champions League place at the very least.

“I don’t think that our game against Chelsea will decide the Premier League title,” Wenger added.

“They have two games in hand, but we have to just to keep going. We have promised ourselves to do as well as we can until the end and then we will see where we stand.”

Christian Benteke decided the game, nodding in an inviting right-wing cross from Leandro Bacuna in the 35th minute to register his eighth goal in six matches.

On his return to White Hart Lane following his sacking by Spurs at the end of last season, Villa manager Sherwood saw his new side open up a six-point cushion over the relegation zone.

But victory came at a price, with centre-back Ciaran Clark and striker Gabriel Agbonlahor, who hit the post, forced off by injury and Carlos Sanchez sent off in stoppage time after receiving two yellow cards.

“It’s a fantastic result,” said Sherwood. “We carried on from the good performance in the 3-3 draw against QPR. We thought we could have a good go, and we did. I thought we deserved to win.”

Spurs’ defeat saw them lose ground in the battle for European places, with Southampton moving two points above them — and leapfrogging Liverpool — by winning 2-0 at home to Hull City.

James Ward-Prowse broke the deadlock with a 56th-minute penalty after former Hull striker Shane Long had been tripped by Alex Bruce. Graziano Pelle then ended his 14-league-game scoring drought with a late strike.

Hull remain in trouble, two points above the bottom three in 17th place, and Sunderland are just a point better off following a humbling 4-1 defeat at home to Crystal Palace.

Connor Wickham volleyed in a late consolation for Dick Advocaat’s Sunderland, who were brought down to earth with a bump after beating derby rivals Newcastle United 1-0 on their previous outing.

Bottom club Leicester City gave their hopes of avoiding relegation a huge boost by twice coming from behind to win 3-2 at West Bromwich Albion, which lifted Nigel Pearson’s side to within three points of safety.

David Nugent and Robert Huth successively cancelled out efforts by Darren Fletcher and Craig Gardner before Jamie Vardy charged to the edge of the West Brom box and drilled home an injury-minute winner.

“It was an exceptional goal (from Vardy), but we can’t get carried away,” said Leicester manager Pearson.

“It’s great to get back-to-back wins, but we still have an awful lot to do.”

Jonjo Shelvey’s penalty earned Swansea City a 1-1 draw with Everton, while Marko Arnautovic rescued a 1-1 draw for Stoke City at West Ham United, who had gone in front through a fine 25-yard free-kick from Aaron Cresswell.