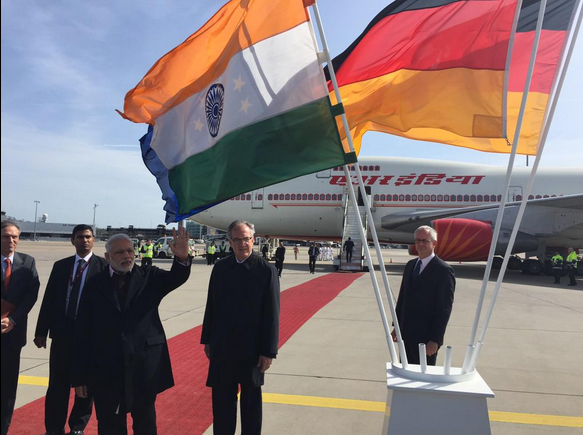 Hannover: Prime Minister Narendra Modi reached the German city of Hannover on Sunday afternoon during the second leg of his three-nation tour of France, Germany and Canada.

Business and technology will be the focus of his engagements aimed at attracting participation in the ‘Make in India’ campaign.

During his first official visit to this country, Modi and German chancellor Angela Merkel will jointly inaugurate India’s participation as ‘partner nation’ in the Hannover Fair besides holding in-depth talks.

Merkel and Modi will attend an opening ceremony of the annual Hannover Fair, the world’s largest show of capital goods and technology.

The two leaders are also scheduled to address the gathering at the Hannover Congress Centre.

Chancellor Merkel will later host a dinner in honour of the PM Modi and his delegation.

Modi has a packed schedule in Germany. Besides inaugurating the industrial fair and unveiling of the statue, he is expected to meet a cross-section of German business leaders in Hannover.

Around 120 top executives from India as well as several representatives of Germany’s business and industry are expected to join the two leaders for the dinner.

On Monday morning, Modi and Merkel will jointly open India’s national pavilion featuring the products and services of more than 400 companies and will take a tour of the stands of some Indian and German exhibitors.

This will be the largest participation so far by Indian companies at the Hannover Fair. The two leaders will later take part in the opening of the Hannover Fair Business Summit, which is devoted to the ‘partner nation’.

He will also unveil a bust of Mahatma Gandhi in Hannover. Chancellor Merkel will receive Modi with full military honours at noon on Tuesday at the chancellery here and afterwards she will host a lunch in his honour. They will have detailed talks in Berlin with focus on how Germany can work with India in its developmental agenda.

Their discussions will focus on matters of bilateral relations as well as global and regional issues of mutual interest, the government said in a press statement. They will wind up their discussions by addressing a joint news conference in the afternoon.