Home Sports Mickelson back in black in bid for fourth Masters 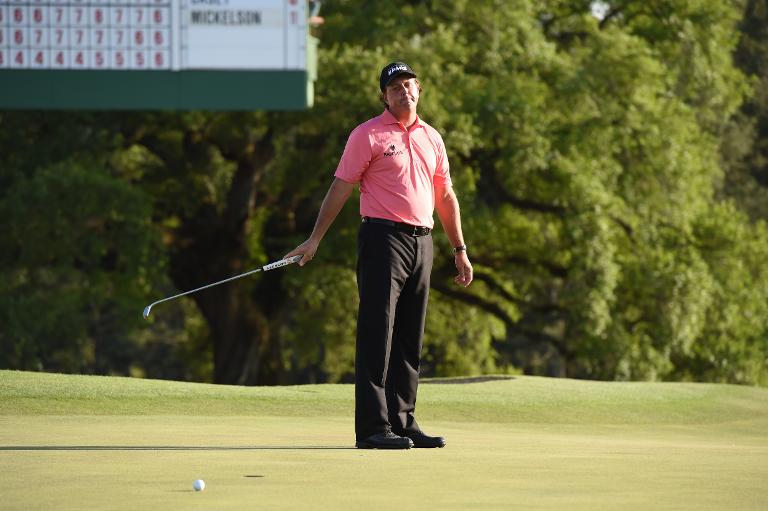 Phil Mickelson wore a salmon-colored shirt Saturday at the Masters to emulate legend Arnold Palmer, but he will be back in black seeking a fourth green jacket in Sunday’s final round.

Mickelson fired a five-under par 67 in the third round at Augusta National to charge up the leaderboard, holing a spectacular 40-foot birdie putt at the par-3 16th that helped him stay on contention for his sixth major title.

“It was really a fun day,” Mickelson said. “My short game has gotten really sharp over the last week or so. It has gotten better and better as the week’s gone on. And I’m hitting it all right.”

Mickelson stands third on 11-under 205 after 54 holes, five shots back of leader 21-year-old Jordan Spieth, seeking a wire-to-wire victory in his second Masters start, and one behind England’s Justin Rose.

“He would just be a great champion,” Mickelson said of Spieth. “I’m going to try to stop him, but we’ll see how it goes.”

Mickelson hoped his fashion statement would inspire a solid round and it did.

“It’s not my color, it doesn’t look good on me, I don’t wear it well,” Mickelson said. “But I had a premonition after spending time with Arnold Palmer. He likes to wear this color. I just had a feeling that I needed to make a move, and I had it in the bag and pulled it out.”

Now Mickelson hopes to emulate Palmer and Tiger Woods and become a four-time Masters champion. But to do that, the 44-year-old US lefthander will be back in black.

“I’ve won three times here wearing black shirts, so I’ll wear a black shirt tomorrow,” Mickelson said. “It also helps me get more aggressive. Studies have shown, like NFL teams, when they wear black, they have more penalties. That’s what I need to do tomorrow is play more aggressive.”

Mickelson would become the second-oldest winner in Masters history after Jack Nicklaus, who was 46 when he won in 1986.

“I’m not going to try to convince anybody. I’m going to go have fun tomorrow,” Mickelson said.

Mickelson has only one top-10 in his past 31 starts but it was a runner-up effort at last year’s PGA Championship.

Mickelson went four-under 32 on the front nine, matching Rory McIlroy and Tiger Woods, and had three birdies in four holes capped by his stunner at 16.

“It’s crazy to make that putt,” said Mickelson. “I’m just trying to two-putt it. I had perfect speed and it just kind of floated in the side door. I remember in 1991 watching Jack Nicklaus and Tom Watson both hit that putt, both made it, and I remember being up in the clubhouse feeling the ground reverberate from the roar. So it’s makeable, but it’s not an easy one.”