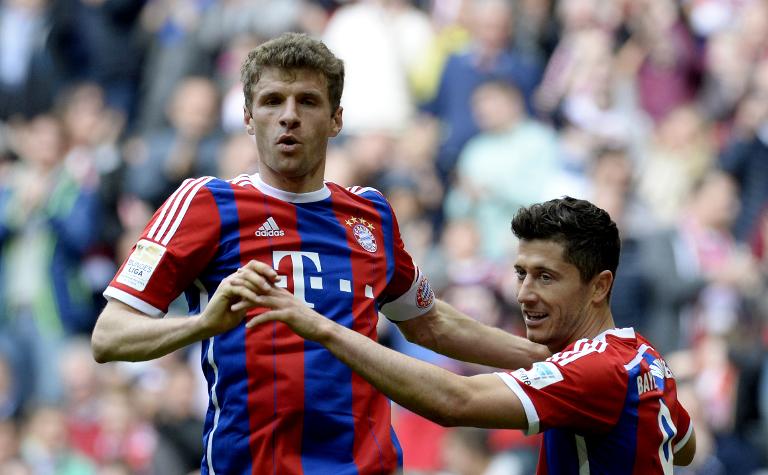 Robert Lewandowski scored twice as injury-hit Bayern Munich romped to a 3-0 league win over Eintracht Frankfurt on Saturday ahead of their Champions League quarter-final at Porto.

Despite having only four fit players on the bench, Bayern dominated at Munich’s Allianz Arena and are three wins from claiming a third straight German league title.

Lewandowski, the Bundesliga’s top-scorer last season, now has 16 goals for the season and is third in the current rankings.

Frankfurt were missing the league’s top scorer with Alexander Meier, who has 19 goals in 26 matches, out with a knee injury.

“I hope no one else gets injured now against Porto.”

Despite their woes, Bayern needed 15 minutes to take the lead when Lewandowski produced a world-class turn and volley, then headed home, with suspicion of offside, on 66 minutes.

Mueller added the third eight minutes from time when he fired home from a seemingly-impossible angle.

Second-placed Wolfsburg remain ten points behind Bayern and on course for the Champions League next season after their 2-0 win at ten-man Hamburg.

Hamburg had Johan Djourou sent off for a second yellow card in the dying stages.

Their caretaker coach Peter Knaebbel has lost both of his two games with Hamburg heading towards a first relegation in the club’s Bundesliga history and are second from bottom and four points from safety.

Wolves face four tough games in ten days as they play Napoli home, then away in the Europa League quarter-finals as well as facing Schalke, who are sixth, and third-placed Borussia Moenchengladbach.

Gladbach picked up their fourth straight league win with an impressive 3-1 victory over Borussia Dortmund.

Brazilian forward Raffel addded their second on 32 minutes before Norway’s Havard Nordveit fired home when left unmarked at the far post with 67 minutes gone before Ilkay Gundogan pulled a late goal back for Dortmund.

“Gladbach deserved the victory, a start like that is the worst case scenario,” said Dortmund coach Jurgen Klopp.

“Then we had to get back in the game against an opponent who are extremely good at counter-attacking.”

Bayer Leverkusen enjoyed a 3-2 win over Mainz as they consider terminating the contract of Bosnia international Emir Spahic, who is being investigated by police for allegedly assaulting a club steward.

The win leaves Leverkusen fourth in the battle for one of the Bundesliga’s three automatic Champions League places for next season.

Fifth-placed Schalke are now 10 points adrift of a Champions League place for next season after their goalless draw with relegation-threatened Freiburg.

Augsburg stay sixth in the league despite their shock 2-1 defeat at Paderborn, who picked up their first win since February to climb up to 16th after leap-frogging Hamburg.