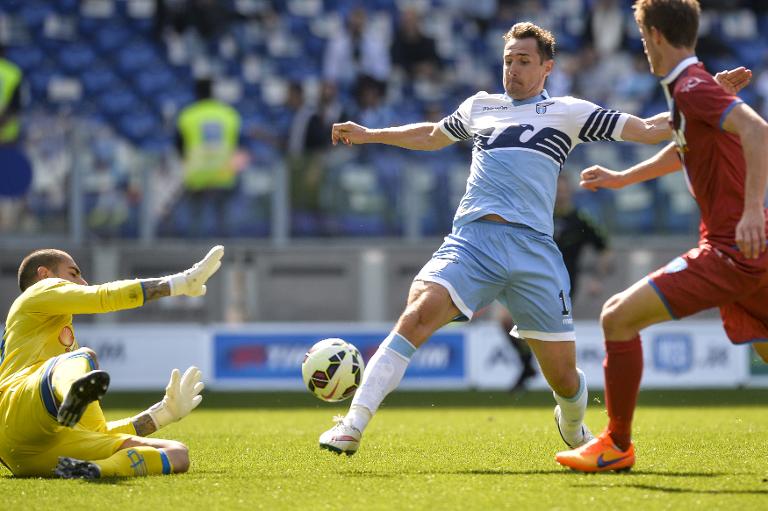 Miroslav Klose and Felipe Anderson starred as Lazio completed their third 4-0 rout of the season, over Empoli on Sunday, to leapfrog city rivals Roma into second place in Serie A.

Roma travelled to Torino hoping to close the gap on leaders Juventus to 11 points after the defending champions slipped up on their way to a shock 1-0 defeat at Parma on Saturday.

However a tight match finished 1-1.

After taking a 57th minute lead thanks to Alessandro Florenzi’s spot-kick, Roma were pegged back by Maxi Lopez’s leveller only minutes later and spurned a host of late chances before settling for a share of the points.

The setback means Roma dropped one place to third to sit 13 points behind Juventus and one behind Lazio after Stefano Pioli’s men turned on the style at the Stadio Olimpico to claim their eighth consecutive league win.

“I’m satisfied with our performance, we had 24 shots on goal but we have to be more precise,” Roma coach Rudi Garcia told Sky Sport.

With Lazio in fine fettle, Roma may have to settle for third place which is synonymous with a place in the Champions League qualifying stages, but Garcia added: “It doesn’t matter that Lazio are second, we’ll see how things lie at the end of the season.”

Elsewhere, Dries Mertens and Marek Hamsik were on target, while Gonzalo Higuain saw a superbly-hit strike wrongly chalked off as Napoli ended a five-game winless run with a 3-0 rout of Fiorentina.

Napoli are now up to fourth place, seven points behind Roma, although Rafael Benitez’s men will drop back a place to fifth if Sampdoria, two points adrift, account for AC Milan in Sunday’s late fixture.

Palermo remained in mid-table despite a 3-1 away win at Udinese where veteran striker Antonio Di Natale hit a late consolation after goals from Achraf Lazaar, Luca Rigoni and Ivaylo Chochev had given the visitors a 3-0 lead by 66 minutes.

Lazio, fresh from ousting Napoli in the Cup semi-finals to book a final date with Juventus, were chasing their eighth win on the trot as they look to beat Roma to the league’s second automatic qualifying spot for the Champions League and were quickly off the mark.

But coach Stefano Pioli admitted it could be a tight end to the campaign.

“Garcia is right when he says the standings are still in flux,” Pioli told Sky Sport.

“We have to be satisfied with where we are now and the work we’re put in to get here, but we can’t forget about our rivals.”

The hosts made the most of their first opportunity, with captain Stefano Mauri nodding Pedro Luis Cavanda’s cross past Luigi Sepe after only four minutes.

Klose doubled Lazio’s lead on the half in almost identical fashion, the German veteran left unmarked to head Cavanda’s cross from the right past Sepe on 31 minutes.

Pioli was forced to replace Stefan de Vrij after he was forced off injured although losing the Dutch defensive rock had little impact. Empoli had little to offer and Lazio were unstoppable up front.

Antonio Candreva virtually wrapped up the points before half-time when his swerving shot left Sepe clutching at thin air and although Mauri’s volley from Kloseâ€™s chipped pass beat Sepe, his effort was ruled offside.

Anderson put the icing on the cake when he tapped home from close range after an alert Klose stole possession in midfield to break through on the left and set up the Brazilian for his 10th goal in 24 games.

Lazio were forced to play the last half hour with 10 men after Diego Novaretti, who had replaced De Vrij, saw red for a second bookable offence on 58 minutes but Empoli failed to capitalise.