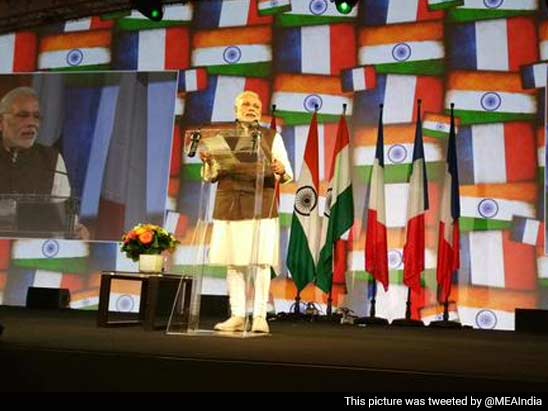 Paris: Prime MinisterÂ NarendraÂ ModiÂ made a strong pitch for a permanent seat for India in the UN Security Council, saying it should get it as a “right” for its immense contribution to global peace.

“Gone are the days when India had to beg; now we command our rights. The occasion of World War I centenary is an opportunity to give the land of Gandhi andÂ BudhhaÂ its right. India is a nation that has always believed in world peace,”Â ModiÂ said while addressing the Indian Diaspora at a community reception in Paris.

“Indians have never fought a war because they wanted to expand their territorial boundaries. India has never been an aggressor in thousands of years of her history. We are a peace-loving nation.” he said, asking the United Nations to reconsider its stand on the issue when it celebrates the 70th anniversary.

Targeting the Indian audience in France,Â ModiÂ said:Â “There are many Indians living in France today. TheÂ colourÂ of your passports might have changed but theÂ colourÂ of our blood hasn’t. I am sitting to far but I would like to salute those people.”

“This is my last community address in France as I am going to Germany after this. Today, I have come here to take all the tourists to India. First I had come here with a curiosity about France; today I’ve come with a dream to take my nation ahead,” he added.

He also said that it was unfortunate that India, which is known as the land of love and sacrifice, is today struggling for a single seat in the UN Security council.

Prior to the homage, Prime MinisterÂ ModiÂ visited a Prefecture in Toulouse, France. He also attended a presentation of Airbus’ suppliers and interacted with representatives of some of the key local Airbus partners in the city.

The Prime Minister, who is currently on the first leg on his three-nation nine-day tour, arrived at the UNESCO headquarters at Place deÂ Fontenoy, Paris yesterday.

He will reach Canadian capital Ottawa on Tuesday on the final leg of his visit.