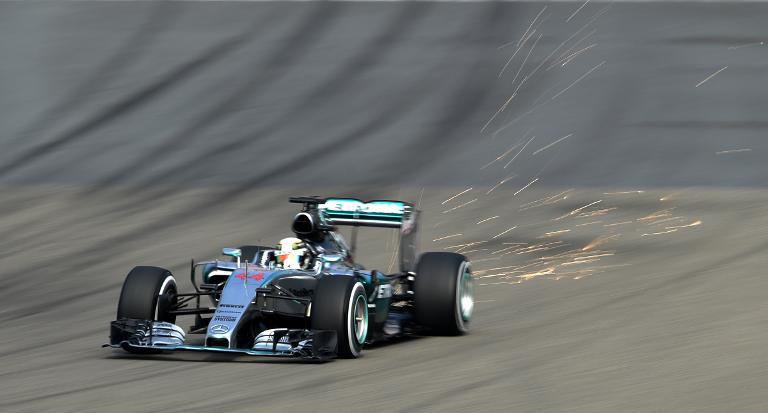 Lewis Hamilton starts as the red-hot favourite to win a fourth Chinese Grand Prix on Sunday after dominating the week so far in Shanghai.

The world champion stormed to a record fifth pole in China by pipping Mercedes team-mate Nico Rosberg, whose petulant reaction to missing out threatened to reignite a feud which boiled over last year.

Hamilton has been unstoppable in qualifying over the first three races this year and it will take something special to beat the Briton in the race starting at 2:00 pm (0600 GMT).

“David Coulthard mentioned to me I’ve started 150 races and I’ve started on the front row 75 times or something, which is kind of cool,” smiled Hamilton.

“But ultimately world championships are the only thing that really matter to a driver.”

Hamilton will face pressure from a fired-up Rosberg, who refused to shake his rival’s hand after qualifying, reserving his congratulations for fellow German Sebastian Vettel, who had lapped third fastest in his Ferrari.

Rosberg’s irritation at falling just four hundredths of a second short of Hamilton’s lap time prompted a fit of pique and he snapped at Mercedes mechanics over the radio: “Oh come on, guys!”

As hissy fits go it doesn’t come close to last season when the German drove into Hamilton’s car in Belgium, but there were clear signs that Rosberg was beginning to feel the pressure, having been told by Niki Lauda to “sort himself out”.

Vettel, who stunned the Silver Arrows to win in tropical Malaysia two weeks ago, will start alongside the Williams of Felipe Massa on the second row with another Williams, that of Valtteri Bottas, and Kimi Raikkonen’s Ferrari in fifth and sixth.

The cooler conditions in Shanghai make a repeat of Vettel’s Sepang shock unlikely, although Ferrari’s ability to preserve their tyres make them a threat to the feuding Mercedes drivers.

“Obviously we’ve got a tough race ahead of us,” said Hamilton. “Nico’s very quick and also the Ferrari’s are very good still with their long-run pace, so it’s not over at all.”

Red Bull’s Daniel Ricciardo and Romain Grosjean’s Lotus start from the fourth row, while the Saubers of Felipe Nasr and Marcus Ericsson complete the top 10.

But heavyweight McLaren’s former world champions Jenson Button and Fernando Alonso are back on the ninth row.

Alonso stormed past mechanics and into the garage without a word after qualifying 18th as McLaren boss Ron Dennis stared grimly at his time screens.

Both Button and Alonso, suffering a wretched run of misfortune on his return to McLaren, failed to finish in Malaysia to leave them without a single point from the first two races.

Mercedes won 16 of 19 races last year and again skittled their rivals in this season’s opener in Australia, before Vettel stopped the rot in Sepang to give Ferrari a first win since 2013.

Race security has been tightened after a fan invaded the track during Friday’s free practice, vaulting the pitlane wall and demanding to test-drive a Ferrari before being tackled by stewards.