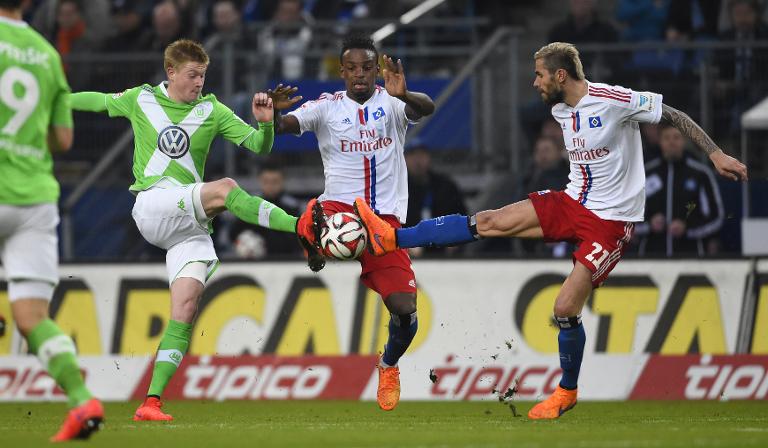 Relegation-threatened Hamburg confirmed Sunday that their players came to half-time blows during their latest defeat amidst jokes that even Cristiano Ronaldo could not help the Bundesliga strugglers avoid an historic drop.

Their 2-0 home defeat to Wolfsburg on Saturday left Hamburg 17th in the table and four points from safety with six games left.

They finished with ten men after Swiss defender Johan Djourou was sent off late on for a second yellow card against Wolfsburg.

Hamburg’s media director confirmed reports that Djourou and midfielder Valon Behrami came to blows in the Hamburg dressing-room during the half-time break.

“It’s true, there was an incident and those involved will be fined,” Hamburg’s Joern Wolf told SID, an AFP subsidiary.

Hamburg have failed to score in the last 494 minutes of Bundesliga football and have netted just 16 times in their 28 league games this season, leading to jokes even Real Madrid goal-machine Ronaldo could not save them from relegation.

“My brother said that even Cristiano Ronaldo could come — and he wouldn’t be able to help either,” quipped Hamburg’s Croatia striker Ivica Olic.

Olic re-joined Hamburg from Wolfsburg in January’s winter break, but is still waiting for his first goal since his return.

Hamburg have lost 15 games, the most in the Bundesliga this season.

They are the only team in Germany’s top flight to have never been relegated but an historic drop to the second division looks imminent having only stayed up last season only after winning a two-legged play-off.

They face Bremen away in the north German next Sunday before playing Augsburg, Mainz, Freiburg, bottom side VfB Stuttgart and Schalke in their games.

“The second-half (against Wolfsburg) had nothing to do with football,” fumed Hamburg defender Heiko Westermann.

“No-one helped their team-mates and a few players were afraid.

“We need a team with fire up their backsides, we need to be more brave and angry.

“We must win in Bremen, we can’t just say we’ll perhaps win.

“We can’t just get by crossing our fingers and hoping, like we did last year.”