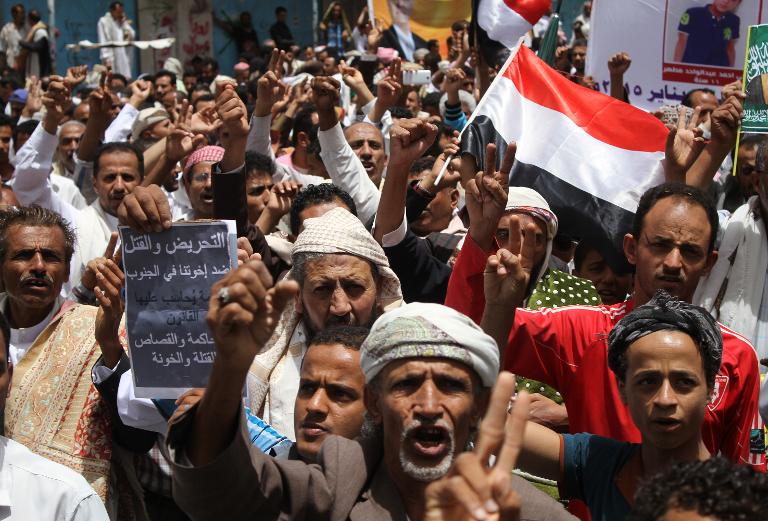 The Red Cross and UN flew medical aid into Yemen’s capital Friday after southern city Aden was battered by the heaviest night yet of Saudi-led air strikes targeting Shiite rebels.

The United Nations also called for a daily “humanitarian pause” of a few hours, saying aid was desperately needed in the conflict-ravaged country.

The International Committee of the Red Cross said it dispatched an aircraft to Sanaa, its first aid shipment since the international campaign against Shiite rebels began last month.

“This is the first ICRC plane to have landed in Sanaa. It is loaded with 16 tonnes of medical aid,” said Marie Claire Feghali, Red Cross spokeswoman in Yemen.

“The raids began at around 10:00 pm (1900 GMT) on Thursday and were the most violent since the start of ‘Operation Decisive Storm’,” a resident told AFP.

More than two weeks of heavy bombardment by the Saudi-led alliance against opponents of exiled Yemeni President Abedrabbo Mansour Hadi and fighting between rival militias prompted the UN to call for a freeze in the violence.

He insisted that the aid delivered to date was far from sufficient.

“The situation in Aden is extremely, extremely preoccupying if not catastrophic,” he said, warning that Yemen’s second largest city had fallen prey to “urban warfare” and “uncontrollable militias”.

Medical sources in Aden said Friday that Huthi snipers there had killed three civilians — an old woman, a child and a man.

The World Health Organization said nearly 650 people have been killed and more than 2,000 injured in the fighting, but the actual number of fatalities is likely to be far higher since many people are not reaching hospitals and being buried immediately, Van Der Klaauw said.

The UN’s children agency UNICEF said it had also airlifted 16 tonnes of aid to Sanaa, including medical supplies for 80,000 people as well as food supplements for 20,000 children.

“The supplies we have managed to bring in today can make the difference between life and death for children and their families,” said UNICEF Yemen representative Julien Harneis.

The Saudi-led coalition says it will continue its raids on Yemen until Iran-backed Huthi rebels, who seized control of Sanaa and central areas last year, retreat to their northern mountain stronghold.

In the most direct American criticism yet of Tehran’s backing for the rebels, Secretary of State John Kerry said Thursday the United States would not accept foreign interference in Yemen.

“There have been — there are, obviously — flights coming from Iran. Every single week there are flights from Iran and we’ve traced it and know this,” he told PBS television.

Iran’s leader Ayatollah Ali Khamenei has warned that the air campaign against the Huthis must end.

“This move is not acceptable in the region and I would warn that they must stop these criminal acts in Yemen,” he said on his website.

“Parliament of Pakistan… underscores the need for continued efforts by the government of Pakistan to find a peaceful resolution of the crisis,” it said.

On Wednesday, two aid boats arrived in Aden carrying supplies and personnel destined for people trapped by and wounded in ongoing battles.

The UN refugee agency UNHCR said on Friday that at least 900 Yemenis had fled the violence to countries in the Horn of Africa over the past 10 days.

UN chief Ban Ki-moon urged the warring factions to return to political talks, which were aimed at ending Yemen’s slide into chaos since Saleh’s 2012 ousting.

“The last thing the region and our world need is more of the chaos and crimes we have seen in Libya and Syria,” Ban said ahead of a trip to Qatar.