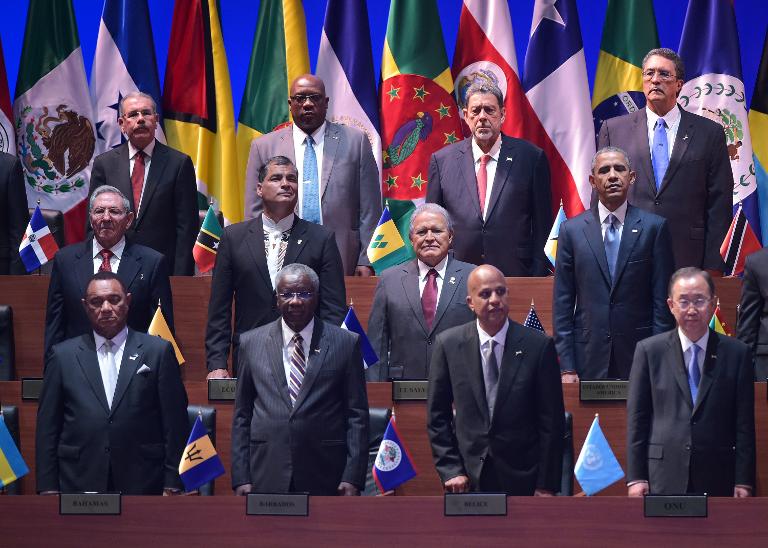 US President Barack Obama and Cuba’s Raul Castro stood near each other at a historic Summit of the Americas on Friday, marking a major milestone in their efforts to end decades of animosity.

Obama and Castro, separated by the presidents of Ecuador and El Salvador, stood in the second of three rows at a Panama City convention center as the country’s national anthem was sung.

The sight of Obama and Castro in the same room instantly became a potent symbol of their bid to renew diplomatic ties that were severed in 1961. It was the first time that a Cuban leader attended the summit in its 21-year history.

Both smiling broadly, Obama and Castro had arrived separately for the two-day summit’s inauguration.

The 30-odd leaders were then heading to a seaside dinner in a complex of ruins dating from the era of the Spanish conquistadors.

Obama and Castro met once before, when they already shook hands at Nelson Mandela’s funeral in December 2013. But US officials said the widely-anticipated discussion would take place Saturday.

The last US and Cuban leaders to meet were Dwight Einsenhower and dictator Fulencio Batista in 1956, three years before Fidel Castro’s revolution.

“We certainly do anticipate that they will have the opportunity to see each other at the summit tomorrow, to have a discussion,” senior Obama advisor Ben Rhodes told reporters.

He said the extent of the meeting had yet to be decided, but that the two leaders will “take stock” of the negotiations to normalize relations and reopen embassies, as well as discuss lingering “differences.”

Rhodes said Obama and Castro had already discussed the ongoing negotiations and the upcoming summit by telephone Wednesday — their second phone call since December.

In a move that could irritate Havana, Obama held a closed-door discussion before the summit with dissident lawyer Laritza Diversent and political activist Manuel Cuesta Moura, along with a dozen other activists from the Americas.

While declaring that the days of US meddling in the region were over, the first African American president of the United States launched a defiant and markedly personal defense of Washington’s support for opposition groups.

“We’ve stood up, at great cost, for freedom and human dignity, not just in our own country, but elsewhere. I’m proud of that,” Obama said, citing the US civil rights movement.

“As you work for change, the United States will stand up alongside you every step of the way.”

Turning to Cuba, Obama said that even as “a new chapter” in relations was launched, “we’ll have our differences, government to government, with Cuba on many issues.”

For his part, Castro held talks with the president of the US chamber of commerce, Tom Donohue, putting together the leader of the only communist regime in the Americas with a major figure of capitalism.

The US and Cuban foreign ministers, John Kerry and Bruno Rodriguez, made history themselves late Thursday when they held the highest level talks since 1958, which both sides hailed as “constructive.”

But Rhodes said there was no decision yet on one of the key obstacles in diplomatic negotiations, Cuba’s presence on the US blacklist of state sponsors of terror.

“I’m not ruling out any announcement but… we are not there yet in terms of a final recommendation being made to the president, and the president making a determination,” Rhodes said.

Cuba’s presence on the blacklist — which also includes Iran, Sudan and Syria — has been a major sticking point in negotiations to reopen embassies.

If Obama decides to remove Cuba from the list, Congress will have 45 days to decide whether to override his recommendation.

Cuba has other major demands, most importantly that the US Congress lift an embargo that the communist regime blames for the island’s economic troubles.

Washington wants Cuba to end restrictions on the movement of its diplomats on the island, giving them unfettered access to ordinary Cubans.

Opinion polls show the reconciliation is backed by majorities of Americans and Cubans, though some US lawmakers have been very critical.

But Cuban government supporters confronted dissidents on the sidelines of the summit, heckling them as they attended a civil society forum.

And even as Obama moves to remove an old source of tension in US relations with Latin America, a new headache has emerged since he imposed sanctions against Venezuelan officials accused of human rights abuses in an opposition crackdown.

Maduro received a hero’s welcome as he arrived at a rally with a hundreds of supporters in Panama City’s El Chorillo monument, built for victims of the 1989 US military invasion to oust Manuel Noriega.

The Venezuelan leader vowed to hand Obama a letter of victims demanding reparations.

“We must have justice,” he said. “The United States must ask forgiveness from Panama and Latin America for the invasion.”

But Washington is seeking to ease tensions, dispatching a senior official this week to meet with Maduro in Caracas.