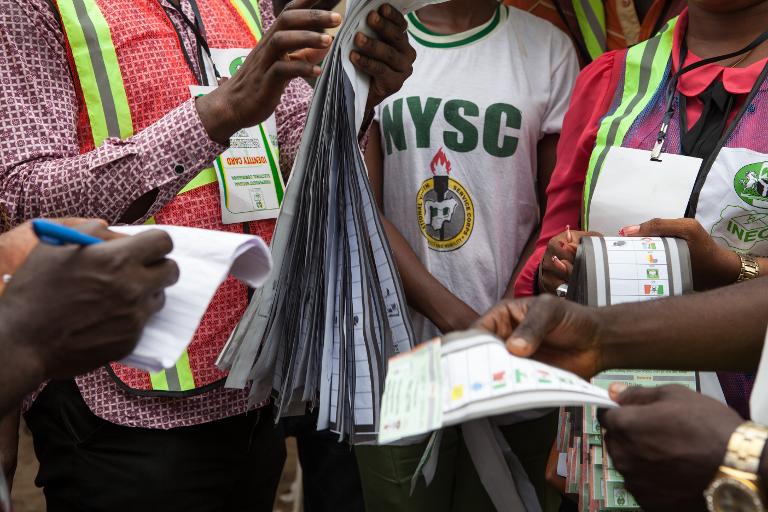 Nigeria began counting votes from state governor and local assembly elections on Saturday, with the main opposition party tipped to build on its historic victory in the presidential race.

Polling stations closed in the southwestern city of Lagos and the southern oil hub of Port Harcourt, with ballots collated and counting started at the scene, AFP reporters said.

Full results from the 29 states voting for new governors and all 36 states electing local assembly members are expected from Sunday.

The main opposition All Progressives Congress (APC) is expected to benefit from Muhammadu Buhari’s presidential win against incumbent Goodluck Jonathan, of the Peoples Democratic Party (PDP).

The PDP currently has 21 governors while the APC has 14.

“The still-ruling PDP will likely lose its majority of the governorships, partly from the bandwagon effect, incumbency fatigue and the APC’s momentum in regions like the southwest and Middle Belt,” the Eurasia Group said in a briefing note on Friday.

But the group’s head for Sub-Saharan Africa, Philippe de Pontet, said the key state of Rivers, in the oil-producing southern delta region, would go to the PDP.

Governors are increasingly influential figures in Nigeria’s federal system of government, exercising near-total control over their states, including finances and projects at the local level.

As a group they have become a considerable force to counter or bolster presidential power.

The Independent Electoral Commission (INEC) received reports of alleged irregularities, voter intimidation and violence throughout the day via its Twitter feed.

But INEC spokesman Kayode Idowu said the electoral body was broadly satisfied with the conduct of the poll.

Security forces were dealing with pockets of violence and other problems, he added.

Claims of rigging were reported in a number of states, including Rivers in the south, which is a key prize for both sides because of the revenues generated by the oil and gas sector.

The police said part of the local INEC office was burnt down in Buguma, the hometown of former Niger Delta militant Mujahid Dokubo-Asari, while shots were fired elsewhere.

There were also claims of voter intimidation in Lagos, where the PDP is trying to wrest control of the megacity and surrounding state from the opposition for the first time.

The north, hit by years of violence from Boko Haram, was largely calm, reporters said, although violence in Buhari’s home state of Katsina delayed voting in the town of Danmusa.

Voting again took place inside camps for people made homeless by Boko Haram violence in the Borno state capital, Maiduguri, but was extended into the evening because of problems with ballot papers.

“We had to reprint the ballot papers in Abuja after we discovered that the logo of the Labour Party was missing,” said Borno state resident electoral commissioner Samuel Madaki.

“The ballot papers were airlifted through the Yola airport but some areas were not covered on time.”

Beyond Lagos and Rivers, the APC has been seen with a chance of gaining the central state of Plateau and northern Kaduna as well as Taraba, which would give Nigeria its first ever female governor.

Nationwide, Nigeria’s police and security services ordered restrictions on the movement of vehicles during polling hours and closed the country’s land borders until Sunday.

Fears of poll-related violence and Boko Haram Haram attacks provided the backdrop for the presidential elections but despite sporadic incidents, widespread violence did not materialise.

But the government called for a similar level of vigilance.

Handheld devices to authenticate voter identities were again used to cut electoral fraud that has blighted previous elections, despite some malfunctions two weeks ago.

Problems with some of the machines in recognising biometric details stored on voter ID cards, including those of Jonathan, forced the election to go into a second day in some places.