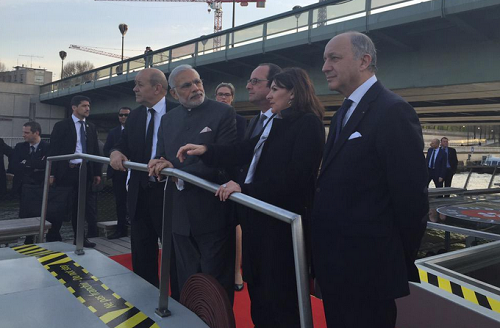 Hollande was seen giving details to Modi about various areas as the boat cruised through the river.Â

Many people enjoying a boat ride in the river at that time were seen waving at the dignitaries, including French ministers.Â

The two leaders had the boat ride after their detailed discussions, focusing on cooperation in the areas of civil nuclear energy, defence, space and trade.Â

Modi is visiting France in the first leg of his nine-day three-nation tour that will take him toÂ GermanyÂ andÂ CanadaÂ also.Â

It was the first time that Modi had ‘Naav Pe Charcha’ with any world leader.Â

Earlier, Modi has had ‘Chai Pe Charcha’ (chat over tea) with some world leaders, including US PresidentÂ Barack ObamaÂ during his visit to NewÂ DelhiÂ in January and Japanese Prime Minister Shinzo Abe during the Indian leader’s visit to that country last year.Â