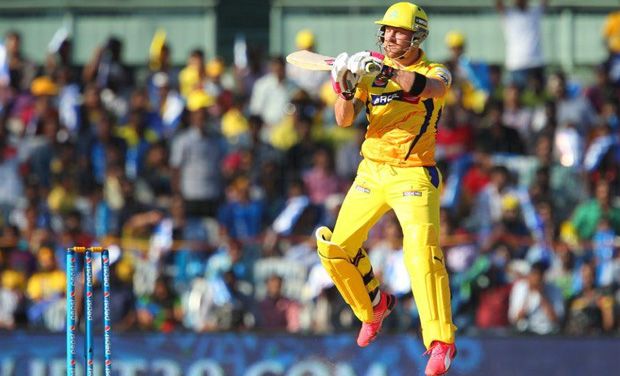 After winning the toss, Chennai Super Kings were off to a sensational start as McCullum and Smith launched into the attack and pushed Sunrisers Hyderabad on backfoot.

The New Zealander carried his bat and scored a ton on the final ball of the Chennai Super Kings’ innings. The Kiwi skipper scored 100 off 56 balls with the help of 9 sixes and 7 fours.

Although Kane Williamson played some pretty strokes, it was too late as Chennai Super Kings went on to seal a comfortable 45-run win.

While others failed to hang in for significant time, Warner stayed put to score a fifty. But Dwayne Smith’s fine catch on the mid-wicket boundary saw Warner depart after scoring 53 from 42 balls.

Naman Ojha tried to accompany to Warner for a while. But a tossed-up delivery from Ashwin ended Ojha’s patience and he was caught by Mohit Sharma in the deep.

Sunrisers Hyderabad were off to a solid start as Dhawan and Warner did not play any loose shots. But Mohit Sharma broke this partnership when he dismissed Dhawan in the fourth over after the left-hander had scored 26.

For Chennai, skipper Mahendra Singh Dhoni smashed 53 off 29 balls while briskly adding 63 runs for the third wicket with the New Zealander. McCullum had stands of 75 with his opening partner Dwayne Smith 60 with Suresh Raina, respectively.