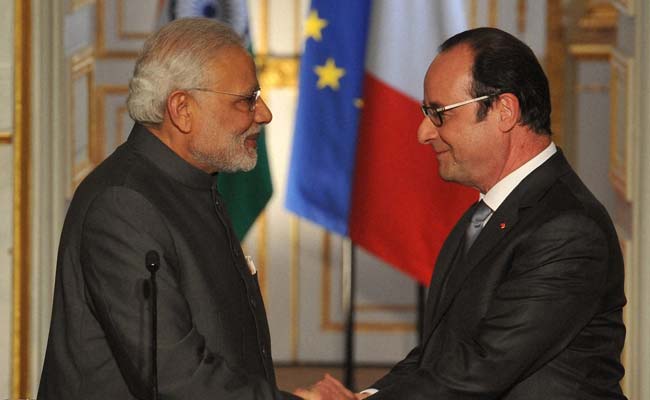 Paris: It was dubbed as â€˜naav pe charchaâ€™ but Prime Minister Narendra Modi seemed to spend more time in the famous sights of charming Paris as he sailed down the Siene River with French President Francois Hollande by his side on Friday evening.

Charcha happened before the boat ride at the Elysee Palace where the two leaders met for summit talks. Apart from a breakthrough on the deal for Rafale fighter jets â€“ India has said it is looking buy 36 jets off the shelf â€“ the two countries have signed 17 agreements, including one on a stalled nuclear project in Jaitapur in Maharashtra.

An MoU was signed between Larsen and Tubro and France’s AREVA aimed at cost reduction by increasing localisation, to improve the financial viability of the Jaitapur project.

The agreement will also enable transfer of technology and the development of an indigenous nuclear energy industry in India.

The space agencies of two countries also agreed to cooperate in the areas of satellite remote sensing, satellite communications and satellite meteorology. Other agreements signed were in the fields of energy, culture, tourism, conservation, Ayurveda, skill development and science and technology.

Earlier, Modi used his ‘Make in India’ initiative to invite top French businessmen to invest in the country, particularly in the areas of defence and infrastructure.

On Friday, Modi addressed a packed hall of UNESCO headquarters, where he assured that rights and liberty of citizens of all faiths will be protected and equal place ensured for them in India.

In France, Modi will not confine his visit to Paris. He will travel all the way to Toulouse in the south of France, where he will visit the Airbus factory.

In the north of France, he will visit a memorial for Indian soldiers who died in the First World War.

Earlier, Modi was given a ceremonial welcome as he arrived in Paris on Thursday night, his first official visit to Europe after becoming the Prime Minister.Â