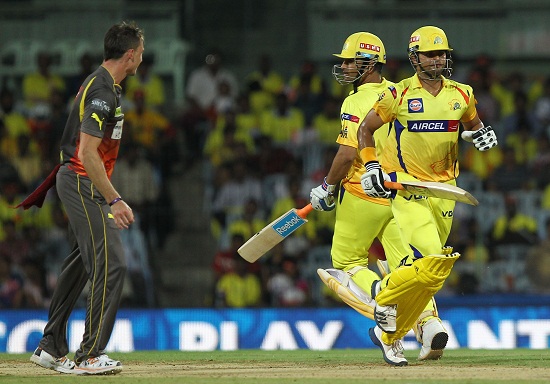 Chennai: SunrisersÂ HyderabadÂ would bank on their famed foreign recruits to come good when they take on the formidable ChennaiÂ Super Kings in their opening match of theÂ IPLÂ in Chennai on Saturday.Â

The visitors will have to put up an inspiring effort to down Super Kings, who kick started their campaign with a one-run win overÂ DelhiÂ Daredevils in Chennai on Thursday night.Â

Led by aggressive Australian opener David Warner, Sunrisers would be relying mostly on foreigners to deliver the goods, given the scarcity of local stars in their ranks.Â

Shikhar DhawanÂ is the lone Indian batting star in the line-up and a lot would be expected of him after his impressive run in the World Cup Down Under.Â

With an array of foreigners it will be interesting to see which four the Sunrisers pick in their playing eleven.Â

Besides captain, South African speedster Dale Steyn and in-formÂ New ZealandÂ pacerÂ TrentÂ Boult are most likely to get a go.Â

The pitch offered enough assistance to the spinners last night and that is something both captains will keep in mind while selecting the eleven.Â

Dhoni led Super Kings did pull off another close game but tomorrow they would want to put up a much better batting show than what they managed against Delhi. Not many teams in the competition would mind chasing 151 at Chepauk but Delhi threw away a golden opportunity.