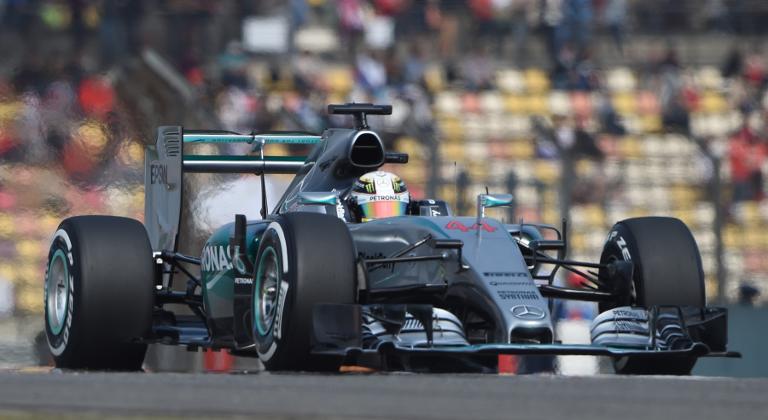 Ferrari’s Sebastian Vettel, who stunned the Silver Arrows to win in Malaysia two weeks ago, will start from third on the grid for Sunday’s race, alongside the Williams of Felipe Massa.

Hamilton, who won in Shanghai for the third time last year, clocked the quickest time of one minute, 35.782 seconds to maintain his perfect qualifying record at the season’s first three races.

“We have a tough race ahead of us,” Hamilton told reporters. “The Ferraris are strong on long-run pace and really good at looking after the tyres so it’s not over by any means. But I think we’re strong enough to answer mostly to whatever they throw at us.”

Rosberg lapped just four hundredths slower than the Briton, and when informed he had just missed out on pole, yelled over the radio: “Oh come on, guys!”

Clearly irritated, the German shook hands with countryman Vettel but blanked Hamilton as the top three posed for photographs in the pit lane.

“Four hundredths is the blink of an eye so that’s even more annoying,” fumed Rosberg. “I had the wrong time in my mind so I was convinced that was enough — It was just like ‘Damn it!’

“It’s very disappointing, but I’m going for the fight for sure and I’ve got the car to do it.”

Hamilton has dominated all weekend, his only real discomfort coming from an overheating seat.

“There’s hydraulics in the car and sometimes your feet start getting very warm,” shrugged Hamilton. “The radiator, the tube that comes into the cockpit or the wires — there’s heat that comes through.

“There will be a small leak somewhere which they’ve been patching up,” added the 30-year-old. “I’ve changed the seat, which had less insulation. It doesn’t burn through the overalls but your butt’s pretty hot. It felt like you’d had a real whooping.”

Vettel clocked 1:36.687 ahead of Massa and the second Williams of Valtteri Bottas as Ferrari failed to get both cars on the second row, Kimi Raikkonen only sixth fastest in smoggy conditions.

“We knew it would be tough in qualifying to be really, really close,” said Vettel. “But we are fairly happy to be right behind them. Obviously we want to close the gap tomorrow.”

Red Bull’s Daniel Ricciardo and Romain Grosjean’s Lotus were next and the Saubers of Felipe Nasr and Marcus Ericsson rounded out the top 10.

However, there was more disappointment for McLaren as Jenson Button and Fernando Alonso languished back on the ninth row, 17th and 18th respectively.

Alonso, who ground to a halt in the morning’s practice with smoke pouring from his car, stormed past mechanics and into the garage after his latest setback, while McLaren boss Ron Dennis stared grimly at his pit screen.

Both Button and Alonso, suffering a wretched run of misfortune on his return to McLaren, failed to finish in Malaysia to leave them without a single point from the first two races.

Mercedes racked up 16 victories in 19 races last year and again pulverised their rivals in this season’s opener in Australia, before Vettel stopped the rot in Sepang to give Ferrari a first win since 2013.

Security for Sunday’s race has been tightened after a fan invaded the track during Friday’s free practice, vaulting the pitlane wall and demanding to test drive a Ferrari before being tackled by stewards and handed over to police.