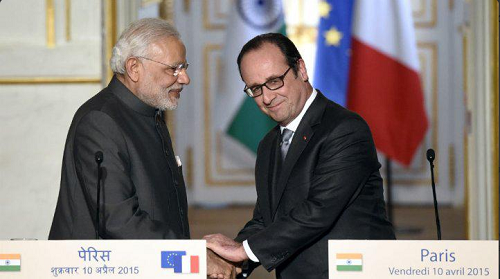 Paris: French media has given a lot of importance to Indian Prime Minister Narendra Modi’s three-day visit to Paris, Toulouse and Neuve Chapelle.

The main newspapers, Le Monde and Le Figaro, have dedicated their front pages to theÂ Indian Premier’s visit, saying that Modi has come to France looking for both investment and technology. It is quite unusual for French newspapers to focus on foreign visiting dignitaries.

Even at the release of the joint statement on Friday in the presence of Modi and President Hollande, in which it was disclosed that 17 bilateral agreements had been inked, the international and French media corps present was at full strength despite it being a Friday evening.

France enjoys a free press and has more than 100 daily newspapers. Most of them are in private hands and are not linked to political parties. Compared to other European nations, the French are not avid newspaper readers, citing only 164 adults out of every 1000 as newspaper readers.

The French press was healthiest in the aftermath of World War II. A year after the end of the war, 28 papers had a combined circulation of about six million. However, seven years later that figure had been nearly halved.

This decline was principally due to the greater popularity of the broadcast media and the subsequent diversion of advertising revenues. Recently, newly produced free papers have further weakened the established press.

According to a write-up by the European Journalism Centre, the present media landscape in France has its cultural roots in the post-war period, when the state decided to regulate an industry that lost credit after the collaborationist Vichy regime.

The state is hence still very present in the written press, via a recently renewed system of subsidies, the TV (with France Televisions as a major actor and its president almost directly appointed by the state), the radio (Radio France group has two stations in the top five in terms of audience), the cinema (with a complex system of subsidies handled by the National Cinematographic Center, or the CNC), and more recently on the Internet (with regulations on cultural products, downloading and property rights known as Hadopi). State-level decisions regarding French media are thus awaited with impatience and are often very important moments.

Regional papers have remained relatively unaffected by the decline, with provincial newspapers commanding a higher degree of reader loyalty. For example, Ouest-France, sells almost twice as many copies as any of the national dailies.

The international French-language channel TV5 Monde, financed by Belgium, Canada and Switzerland, is available globally. Global news channel France 24 TV broadcasts in French, English and Arabic. It has said it aims to present “a different point of view from the Anglo-Saxon world”.

Established commercial radios, particularly RTL and Europe 1, command large audiences. They have been joined by a multiplicity of FM stations, often part of successful networks such as those of hit music station NRJ and oldies station Nostalgie.Â