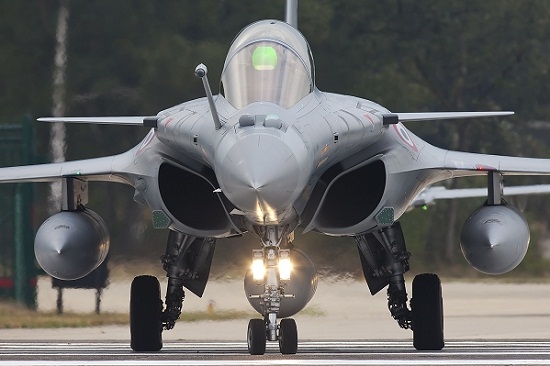 Paris: Marking a breakthrough in the protracted talks in the French Rafale jet deal, Prime MinisterÂ NarendraÂ Modi on Friday announced thatÂ IndiaÂ will purchase 36 of these fighter planes that are ready to fly, citing critical operational requirement of the IAF.Â

The announcement was made by Modi at a joint news conference with French President Francois Hollange after their summit talks at Elysee palace.Â

India and France were locked in negotiations for three years over the purchase of 126 Rafale fighter jets valued at $12 billion but has been bogged down over cost and Dassault Aviation’s reluctance to stand guarantee for 108 planes to be made by state-run Hindustan Aeronautics Limited(HAL).Â

“Keeping in mind critical operational necessity of fighter jets in India, I have talked to him(Hollande) and requested for 36 Rafale jets in fly-away condition as quickly as possible under government-to-government deal,” Modi said.Â

For his part, French President FrancoisÂ Hollande said he was “deeply moved” by the announcements and said they took the partnership between the two countries “into a new gear.”

While long-blocked exclusive negotiations between the two sides had initially focused on 126 French Rafales, the 36-jet order is manufacturer Dassault’s biggest yet abroad — estimated to be worth nearly four billion euros ($4.2 billion).

Negotiations to buy the planes kicked off in 2012 but had been bogged down over cost and New Delhi’s insistence on assembling a portion of the high-tech planes in India.

Defence Minister Jean-Yves Le Drian told reporters after Modi’s announcement that all 36 jets would be manufactured in France.

Analysts say the deal with Egypt may have helped break the logjam in negotiations with other customers since they are now on notice that if they want to have Rafales they may have to wait for them.

India’s military says it needs to start replacing its ageing jet fleet from 2017.

The decision on Rafale jets was among the several agreements reached between the two countries after a meeting of Prime Minister Narendra Modi with French President Francois Hollande.

Calling France a valued friend, Prime Minister Narendra Modi said there is no such sphere where India and France are not cooperating.

Prime Minister thanked France for supporting his Make in India initiative.Â France will also help India to develop smart cities and a high speed rail line between Delhi and Chandigarh.

France has also agreed to give tourist visas to Indians in 48 hours.

An agreement on proceeding forward on the stalled nuclear project in Jaitapur in Maharashtra was among the 17 pacts signed after the talks between Modi and Hollande.Â

The Jaitapur project, where French company Areva is to set up six nuclear reactors with total power generation capacity of about 10,000 MW, is stuck for long because of differences over the cost of electricity to be generated.

Earlier in the day, Hollande said that both the countries are working together to ensure stability and an environment of peace and added that France was looking forward to India becoming a permanent member of the UN Security Council.

The two leaders also released stamps to mark 50 years of Indo-French cooperation and held a meeting wherein they reviewed relations between the two countries and discussed matters pertaining to defence, nuclear, economics, cultural, educational and people to people ties.

Modi addressed the august gathering at the United Nations Educational, Scientific and Cultural Organisation (UNESCO) headquarters in Paris earlier in the day.

The Prime Minister, who is currently on the first leg on his three-nation nine-day tour, arrived at the UNESCO headquarters at Place de Fontenoy, Paris today.

Modi was also accorded a ceremonial welcome at the Elysee Palace in Paris.