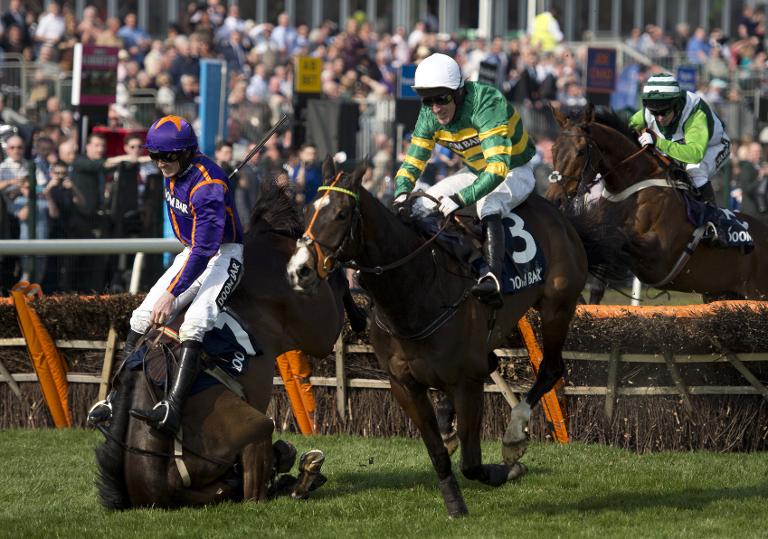 British champion jump jockey Tony McCoy enjoyed more success over the Aintree course fences as Don Cossack cruised to a dominant 26-length victory in the Melling Chase on the second day of the Grand National meeting on Friday.

His latest victory at the Liverpool course gave McCoy his second winner of the meeting after he won the Aintree Hurdle aboard Jezki on Thursday.

“I got a good ride off him,” said McCoy, who replaced the suspended Bryan Cooper aboard Don Cossack. “I owe (owner) JP’s (McManus) son Kieran a favour as we knew early in the week Uxizandre wouldn’t be running.”

The 19-times champion jockey, the most successful rider over fences in Britain and Ireland with more than 4,000 career winners to his name, is set to retire at the end of the season.

However, the 40-year-old Northern Irishman has said he will retire on the spot if he wins Saturday’s Grand National steeplechase — a race that ‘stops the nation’ in much the same way as the Melbourne Cup does in Australia — having previously triumphed over the especially demanding fences on Don’t Push it.

Saturday will see McCoy riding Shutthefrontdoor, an eight year-old trained by Jonjo O’Neill — himself one of the leading jump jockeys of the 1970s and 1980s.

“Sometimes I feel sad about it,” said McCoy of the impending end of his brilliant career in the saddle.

“I’m just trying to keep things as normal as possible and do my job. I can leave the worrying until after I walk out of here on Saturday night.”

O’Neill is renowned for being especially good with staying chasers, the type of horse that traditionally wins the Grand National and McCoy said: “Jonjo has prepared him for the race and is very happy with him.

“He’s brilliant at preparing horses for those big staying chases.

“The Grand National is the most famous race in the world and we were lucky enough to win it with Don’t Push It, but, on the whole, Jonjo as a trainer has a very good record with horses that have run in it and it would be nice for that record to get even better.”

McCoy added: “Jonjo is a great man and a great trainer and I’ve been very lucky to ride for him for 10 years. I’ve enjoyed every moment of it.

“He probably gave me the two greatest days of my life in racing in winning the Gold Cup with Synchronised and the National with Don’t Push It.

“I’ll be forever grateful to him and he was the one who made me ride Don’t Push It.”