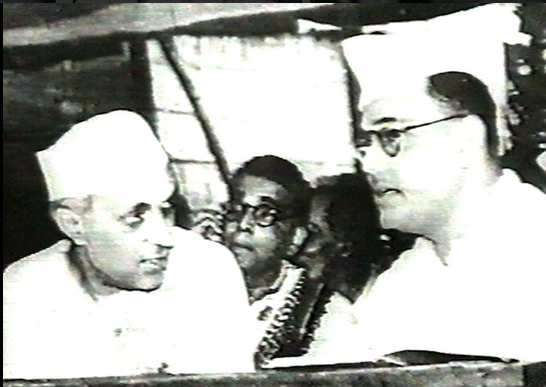 New Delhi: Political snooping is not new in India, and use of Intelligence Bureau (IB) officials for snooping has been a common practice by those who are in power.

And now the leak of two de-classified Intelligence Bureau report files has revealed yet another Â dirty secret of snooping. The de-classified files indicate that former Prime Minister Jawaharlal Nehru spied on the family members of eminent freedom fighter Subhash Chandra Bose almost for two decades from 1948 to 1968.

The snooping row had left the Congress leadership red facedÂ on FridayÂ and has even drawn flak from the opposition as well as from the family members of Bose.

For over a half century the copies of the letter (in pic) and several others like them were kept in an unusual location in the offices of the state IB office in Kolkata. Â

The two files were recently declassified by the Union Home Ministry and placed in the National Archives.

The spying on the family members of Bose continued almost for two decades, as the government placed the Bose family members under intensive surveillance even four years after the death of Nehru.

During this, IB officials intercepted, read and recorded letters of the family of a freedom fighter who was Nehru’s political co-worker for 25 years.

According to the IB files, apart from allegedly intercepting and copying letters written by Bose’s family members, the agency sleuths shadowed them on their domestic and foreign travels.

IB sleuths recorded every minute detail: whom they met and what they discussed.

A series of hand-written messages shows the agents phoned in ‘Security Control’, as the IB headquarters was called, to report on the family’s movements.

â€œIB files are rarely declassified. The original copies of these files are still classified by the West Bengal governmentâ€, said Anuj Dhar, the author of ‘India’s Biggest Cover-Up’. Dhar, who first spotted the files at National Archives in January this year, believes these were accidentally declassified.

“There have been such cases in the US where documents classified by the CIA, like the mole in Indira Gandhi’s cabinet in 1971, were declassified by the state department,” he said to a leading news channel.

Bose was INC president in 1939 and later quit the party following the political differences with Mahatma Gandhi and Nehru. Bose is believed to run away from India in 1941, first to Hitler’s Germany, and later to Japan, where he revived the 40,000-strong Indian National Army in 1943.

Bose, then 48, is thought to have died in a mysterious air crash in Taiwan on August 18, 1945, three days after Japan’s surrender to the Allied forces.

Bose’s grandnephew Chandra Kumar demanded for a judicial probe into the spying.

He said, “It has definitely come as a shock because he was pretty close to Jawaharlal Nehru both, you know, in a personal relationship. Well, politically they differed on certain issues but we never expected that Pandit Nehru would put surveillance on Subhash Bose’s family members.â€

Chandra further adds, “Narendra Modi claims that his government is transparent government. This is a golden an opportunity for him to prove that he believes in transparency. He should order a judicial inquiry a commission of inquiry which should come out with the actual truth.”

Janata Dal United KC Tyagi called the reports unfortunate. He said, “I find it hard to believe Nehru spied on Bose’s family. If what is being reported is true, it is very unfortunate.”

Swamy’s party colleague and Union Minister Mukhtar Abbas Naqvi said, “The Congress has a tainted past and there are many skeletons in their cupboard. I won’t be surprised if Nehru did in fact spy on Bose’s family for 20 years.”