Home Music & Entertainment What made Sandra Bullock hide inside a cupboard? 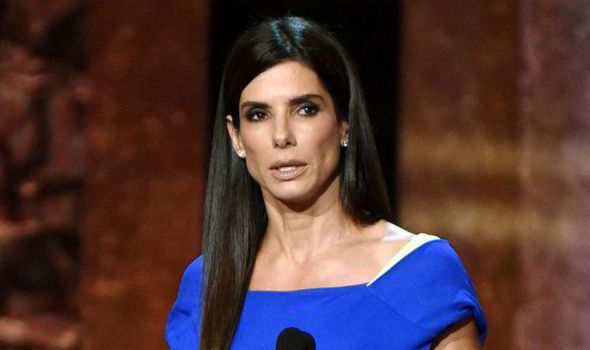 Los Angeles: Oscar-winning actress Sandra Bullock made a 911 call from inside a cupboard after a stalker broke into her mansion with a love letter.

The Hollywood actress had to flee into a closet with a â€˜safe doorâ€™ after Joshua Corbett, 39, broke in on 8 June last year.

The judges heard the frantic recording made by police where Sandra was caught saying “the guy go upstairs into my attic and are coming in my room.”

â€˜Evidence shows that the stalker had an arsenal of illegal assault weapons at his home but was not armed at the time on Bullockâ€™s propertyâ€™, Los Angeles Superior Court Judge Terry Bork said.

Bullock told emergency call handlers, as heard during a recording played in court: â€œIâ€™m in my closet. I have a safe door. Iâ€™m locked in the closet right now.â€Â

Her five-year-old son was not at home at the time.

Bullock gave the police directions to her bedroom over the phone. She thanked the dispatcher when officers had arrived and is said to have sounded like she was crying.

Corbett was holding a black notebook with a two-page love letter and magazine clippings of Bullock, 50, when he was arrested.

The images of her in revealing clothing supported an inference that there was a sexual motivation to his pursuit of the actress.

The judge read out a note in the book which said: â€œYou are so hot and intelligent and lithesome and taut.â€

A defence lawyer argued that Corbett should have his stalking and burglary charges were supressed as he was suffering from a delusion that he was married to Bullock and claimed he was not wanting to hurt her.

â€œThe love letter that Corbett carried with him declared nothing but love and admiration,â€ Paul Takakjian said.

â€œThere is nothing in there about harming her. The people are trying to make more of the case than there is.â€

Corbett appeared at Bullockâ€™s house three nights in a row and had broken into the home in the middle of the night, deputy district attorney Wendy Segall said.

â€œItâ€™s clear that he was stalking her repeatedly and maliciously,â€ she said.

â€œThere is not a more clear-cut case of stalking than this one.â€

Corbett also is charged with having assault weapons, tracer ammunition and machine guns that were found when authorities searched his home. He has pleaded not guilty to all charges.

He is being held on more than Â£1.3m (two million dollars) bail, has pleaded not guilty to all charges and will appear in court again on April 23 on all 26 counts.