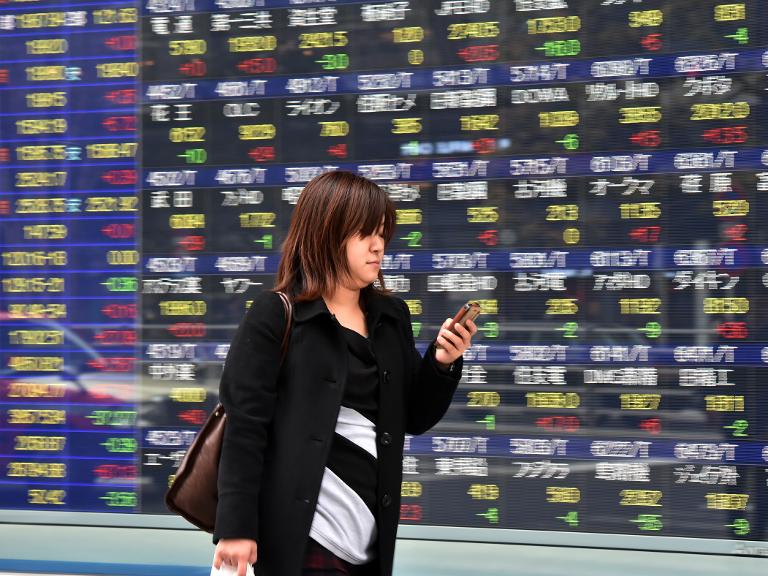 Tokyo investors will be cautious next week with a sense of achievement after the benchmark Nikkei index topped the 20,000 level and as the full-fledged corporate earnings season approaches.

On Friday, Tokyo stocks closed down 0.15 percent, after the benchmark Nikkei index briefly broke through the 20,000 level last seen 15 years ago.

The Nikkei 225 reached 20,006.00 in opening trade, prompting joyful traders at brokerage houses to break into applause.

Over the week the index advanced 2.43 percent.

“The market had a sense of achievement as it broke through the major line of 20,000. Profit taking emerged, pressuring the market today,” said Kenji Shiomura, senior strategist at Daiwa Securities.

“As for the coming week, it is hard to imagine that (the Nikkei) will surge ahead rapidly given the strong sense of achievement for now.”

He also noted the earnings season was going into a top gear, which can invite “caution” among investors.

Friday’s early rise in the index was largely influenced by heavyweight Fast Retailing, the operator of fast-fashion brand Uniqlo, whose shares jumped 3.77 percent a day after announcing strong earnings.

Strategists are upbeat over the outlook for stock prices on expectations of good earnings at Japanese companies, while acknowledging a short-term overshoot.

“When we look back on this moment, the 20,000 figure should just be a stop along the road,” said Juichi Wako, a senior strategist at Nomura Holdings.

“However, above the 20,000 mark, we might begin to hear voices that stocks are a bit overvalued,” he said.

Ayako Sera of Sumitomo Mitsui Trust Bank, said: “It will not be a surprise if we see some selling to take profits at this level.”

The dollar held steady after rising on an encouraging US unemployment claims report.

The US Labor Department said Thursday that the number of first-time unemployment claims filed in the past four weeks fell to a nearly 15-year low, suggesting a stronger labour market.

The robust figures stoked speculation about the Federal Reserve’s plan to raise ultra-low interest rates, boosting the dollar in a positive move for Japanese exporters.

The US data also came a day after minutes of the Fed’s last meeting suggested the first interest-rate increase since 2006 was still on the table for this year.

— Bloomberg News contributed to this article —