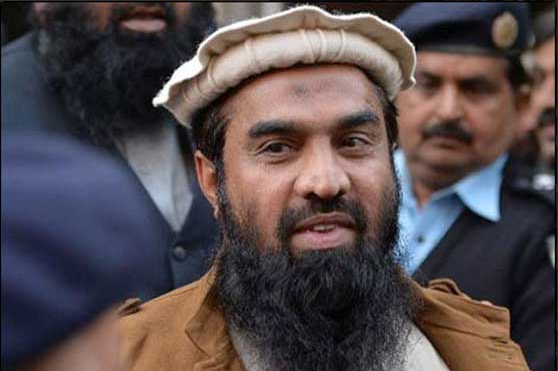 Rawalpindi: Amid strong protest and outrage from India, LeT terrorist and Mumbai attack mastermind Zakir-ur-Rehman Lakhvi was released from Rawalpindiâ€™s Adiala jailÂ late on Thursday night after Lahore High court ordered that he should be released.

This is the fourth time since December 2014 that Lakhvi has had a brush with freedom without actually being released as his release orders were given on December 18, 2014, then Dec 29, 2014, and March 13 this year but this time Lakhvi managed to walk out.

Voicing concern over the release of top Lashkar leader Zaki-ur-Rehman Lakhvi, Union Home Minister Rajnath Singh said India wants talks with Pakistan but the release of the Mumbai attack mastermind is an “unfortunate and disappointing” development.

“India wants talks with Pakistan but the present development (release of Lakhvi) is unfortunate and disappointing,” he told reporters.

Singh was reacting to the Lahore High Court’s judgement on Thursday suspending the detention of 55-year-old Lakhvi under Maintenance of Public Order after the Pakistan government failed to present sensitive records against him in the court.

Asked about alliance partners PDP-BJP in Jammu and Kashmir speaking in different voices on composite townships for settlement of Kashmiri Pandits in the Valley, Singh said, “An agreement has been reached with Chief Minister Mufti Mohammad Sayeed in this regard.”

“Our concerns on this issue have been made known to the Government of Pakistan in the past. These shall be reiterated. The fact is that known terrorists not being effectively prosecuted constitutes a real security threat for India and the world,” foreign ministry spokesman Syed Akbaruddin said.

“This also erodes the value of assurances repeatedly conveyed to us with regard to cross border terrorism?” he added further.

Earlier on March 13 this year, Islamabad High Court squashed the detention of Lakhvi and ordered his release ruling his detention illegal saying it did not have evidence to prove his involvement in the Mumbai attacks.

Lakhvi, a top commander of the banned terror group Lashkar-e-Taiba (LeT), had been in jail since December 1, 2008.

Meanwhile, involvement of Pakistani Army officials in staging an attack on India was also revealed first by the Mumbai police.

Mumbai police identified 37 suspects including two army officers in its wanted list for the 26/11 Mumbai attacks for their alleged involvement in the plot which was later confirmed after the statement given by Syed Zabiuddin Ansari alias Abu Jundal to security agencies also revealed that how few army officials were supporting the terrorist camps to conspire and plan an attack on India.

Jundal, a native of Beed, Maharashtra in his statement confirmed presence of Lakhvi in the control room throughout the 26/11 attack.

In his statement Jundal mentioned that Lakhvi also spoke to Pakistan army officer Major Sameer during the attack, clearly hinting of the Pakistani Army support to LeT outfits in Pakistan.

According to interrogation report accessed by NewsMobile the attacks on India were plotted from Bait-ul-Mujahideen camp on the outskirts of Muzaffarabad in Pakistan Occupied Kashmir (PoK), where the 10 Lashkar-e-Taiba (LeT) operatives who carried out the 26/11 Mumbai terrorist strike were trained.

According to revelations made by Jundal, the only Indian operative to be present in LeTâ€™s control room which was set at Yaqoob’s office in Malir in Karachi, told the Mumbai police in 2012 that Lakhviâ€™s arrest was stage managed by certain elements in the Pakistan Army.

The interrogation report further reveals that beside Abu Jundal and Lakhvi, five more persons were present in the control room who spoke to one of the attackerâ€™s Abu Akasha from the satellite phone.

Interrogation report further reveals that after the attack, training camps of Bait-ul-Muzahiddin, Muzaffarabad was shifted to Dulai onÂ Nov. 27, a day after the attack to destroy the evidences.

Pakistani Intelligence agencies have strongly denied the allegations made by India on the involvement of its army officials in plotting the attack but the revelations in the Jundalâ€™s statement clearly shows that after the 26/11 attack, Muzammil Bhat alias Yusuf Bhai, one of the mastermind received a call from the Pakistan Army official asking them to vacate the LeTâ€™s Bait-ul-Mujahideen camp which was soon to be raided by Pakistanâ€™s FIA on December 1, 2008.

However, few members of LeT left the training camp before the FIA raided the camp. The FIA were able to only arrest Lakhvi, Mujammil, Abu Alkama and Zarar.

Jundal in his statement also claimed that Pakistani Army claims to have raided the camp, but in reality the camps were deserted long before they were raided.

The LeT operatives were arrested as if they were wrongly accused and the atmosphere was non-serious, Jundal in his statement told police.

As per security agencies, Jundal is one of the six handlers along with Lakhvi, Abu alkama, Abu kahafa, Khalid alias wasi, Zarar, Shahid alias Nadeem and Zabiudin who guided the 10 terrorists during the Mumbai attacks from November 26-29, 2008.

Lakhvi is one of seven people on trial in Pakistan over the attacks in Mumbai in 2008 which claimed the lives of 166 people.

India, on a number of occasions, has expressed concern over Pakistanâ€™s inability to prosecute the culprits in spite of submitting detailed evidence.

Even US Congressman Ed Royce in a strong worded statement asked Pakistan to hand over Lakhvi either to India or present him before the international court of justice to be tried for crimes against humanity.