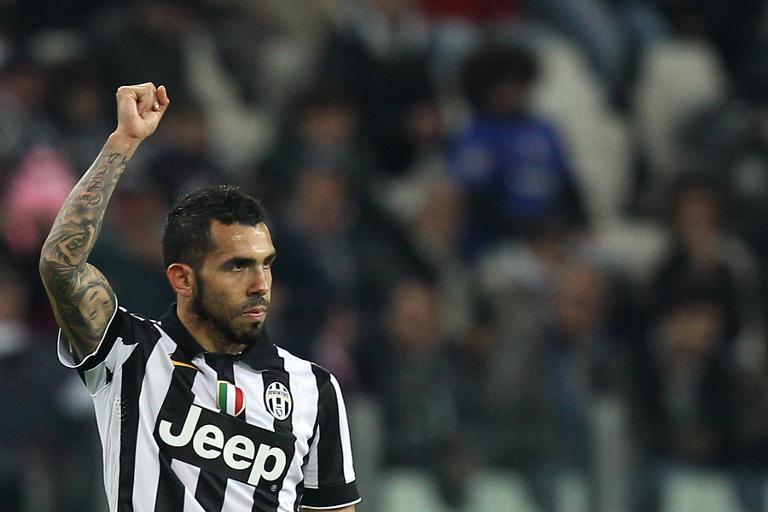 Juventus coach Massimiliano Allegri hinted he won’t rest Carlos Tevez for Saturday’s visit to Parma despite the challenge of a Champions League quarter-final to overcome next week.

The Turin giants host Monaco in the first leg of their last eight tie on Tuesday, when Allegri will expect Tevez to be firing on all cylinders.

Cash-strapped Parma sit bottom of the table having claimed only their fourth win of the season in midweek.

But Allegri hinted Tevez, who leads AC Milan forward Jeremy Menez by one goal at the top of Serie A’s scoring charts, will line up at the Enrico Tardini stadium where Juve will look to extend their 14-point lead over Roma.

“Carlos is in good shape and available,” Allegri told reporters on Friday.

Allegri will have to do without defender Andrea Barzagli, who has suffered a knock barely two weeks after his return from a lengthy injury absence, as well as recovering midfielder Andrea Pirlo.

Pirlo, however, is expected to play some role at Juventus Stadium on Tuesday when the Bianconeri will look to put one foot into the semi-finals of the Champions League.

“Pirlo’s still not quite there yet, but is likely to be involved on Tuesday, and Barzagli will also be out tomorrow (Saturday). He’s been given a period of rest,” added Allegri.

“After being out for eight months and playing five intense games, the odd ailment is inevitable. Whatâ€™s important is being able to manage these situations without risking injury.”

Parma are lucky to even be playing having been declared bankrupt last month and only winning a stay of execution thanks to an injection of funds by league and federation officials.

But confidence is comparatively high after Roberto Donadoni’s men beat Udinese 1-0 on Wednesday in a match initially postponed two months ago because the club could not afford to turn on the electricity in the stadium.

Parma midfielder Francesco Lodi insisted: “Whoever comes to the Tardini should know they’re not just facing a team, they’re facing a whole city.

“We want to finish this season with our heads held high. The Bianconeri will be up against a Parma side that will fight for every ball.”

Allegri said they won’t be taking the match lightly.

“We need to be in top form this weekend… Parma have put in some good displays of late and they’re in decent physical condition,” he said.

“All credit to Donadoni and all of his players for the dignity and professionalism theyâ€™ve displayed during a difficult season.”