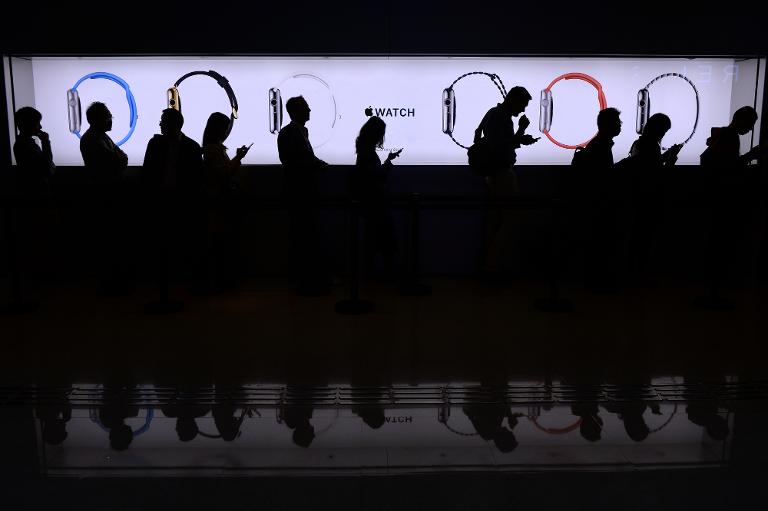 Samsung rolled out a new smartphone on Friday in a bid to regain market dominance as arch-rival Apple, eyeing the next generation of wearable technology, opened pre-sales for its first watch.

Samsung’s Galaxy S6 and its curved-edge variant, the Galaxy S6 Edge, went on sale in South Korea, home of the electronics giant, as well as Europe, the United States and markets in the Asia-Pacific such as Australia, Singapore and India.

Samsung, labouring under successive quarters of plunging profits and booming sales of Apple’s iPhone 6, is hoping the new phone will reverse its fortunes.

The range of S6 models has won strong reviews from tech pundits, with the Wall Street Journal calling them “the most beautiful phones Samsung has ever made”.

“Given the response from the market and clients… we expect the S6 to set a sales record for all Galaxy models,” Lee Sang-Chul, the vice head of Samsung’s mobile unit, told reporters.

Joo Seung-Bin was one of the first in line to buy an S6 in Seoul on Friday morning.

“It’s not cheap, but then I’m not one of those people who upgrades their phone every year. There’s been a lot of buzz about this model, so I thought I’d check it out,” Joo said.

Both models are powered by Google’s Android operating platform and, in a break from their-plastic-backed predecessors, feature metal and glass bodies.

“Demand for the new Galaxy model is considerable,” said a spokeswoman in Germany for Media Saturn, the largest electronics retailer in Europe, although she said stocks had not been sold out.

However, the S6 had to contend on launch day with the Apple Watch, which will connect wirelessly to a user’s iPhone to facilitate messaging, calls and apps — especially ones geared toward health and fitness.

The first generation of smartwatches from the likes of Motorola, LG and Samsung itself failed to gain much traction with consumers. But experts say the Apple Watch may have an edge given its design quality and universe of apps.

The US company on Friday started taking pre-orders for the watch both in selected territories and online. First deliveries will begin in nine countries on April 24.

“I’m very keen to buy it,” said Kazuki Miura, a 43-year-old technology writer, as he slipped the device onto his wrist.

But in Paris, there were no throngs outside the company’s flagship store by the Place de l’Opera as was the case with the unveiling of previous new Apple products, with journalists outnumbering shoppers.

Laurent, a 27-year-old software developer, hesitated between a black or white sport wrist band, so took a picture with his smartphone “to be able to decide later”.

But that later could mean plumping instead for a Huawei Watch, which the Chinese company unveiled last month, because “it has a more classical shape even if it is thicker.”

Tech firms are betting heavily on wearables as the next frontier in consumer electronics.

And not only tech companies: last month luxury Swiss watchmaker TAG Heuer announced it was joining forces with Google and Intel to develop a rival to the Apple Watch.

Apple Watch prices will start at $349, with a limited-edition gold version costing $10,000.

Jan Dawson at Jackdaw Research expects Apple to sell around 20 million of the devices this year, which will “catalyse the overall smartwatch market and help other vendors even as Apple comes to enjoy levels of market share it hasn’t had since the iPod”.

But, despite fierce competition on various market fronts, there are signs that Samsung is beginning to fight back. Earlier this week it released a better-than-expected profit estimate for the first quarter.

Samsung suffered a dramatic slide in profits last year, hit by slowing demand in an increasingly saturated and competitive smartphone market that it had largely dominated since 2011.

The company struggled to fend off a double challenge from Apple in the high-end market and rising Chinese firms such as Lenovo and Xiaomi in the fast-growing mid and low-end markets.