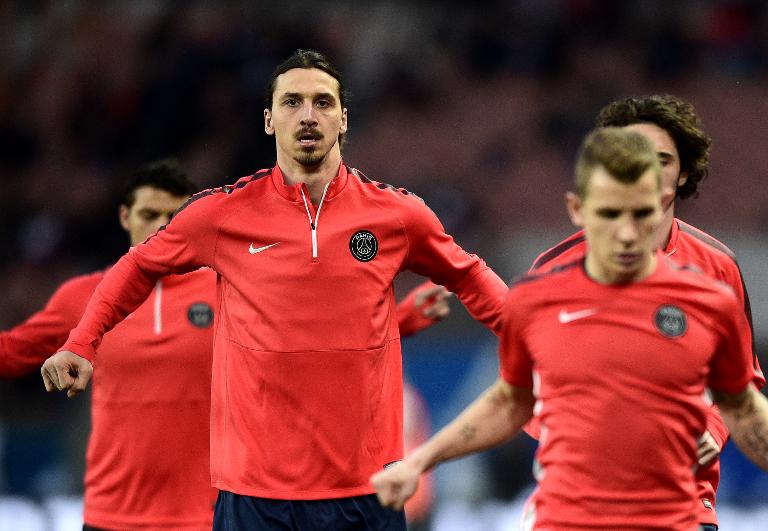 Paris Saint-Germain can pick up the first of potentially four trophies on Saturday when they defend the League Cup against Bastia at the Stade de France.

Laurent Blanc’s expensively-assembled squad have rumbled steadily through their season on an unprecedented bid for history but in recent weeks have stepped up a gear and are now in almost peak form for the home stretch.

The final will be a repeat of the first ever League Cup final in 1995 when PSG defeated Bastia 2-0 in front of less than 25,000 fans at the Parc des Princes.

Zlatan Ibrahimovic was suspended on Thursday for four matches for a tirade towards a referee and saying: “In this shit country, this country does not deserve PSG. We are too good for this country.”

But the Swedish star remains eligible to play with the ban not being applied until next Tuesday.

He fired home a stylish hat-trick on Wednesday as PSG brushed aside Saint-Etienne to also reach the French Cup final against second division Auxerre on May 30.

While their Swedish talisman remains the centre of attention in the world of French football, he is set to miss key league matches due to his outburst while a one match suspension also means he misses the first leg of their Champions League quarter-final at home to Barcelona next Wednesday.

However despite the recent criticism towards the 33-year-old striker from Malmo, Blanc lept to the defence of his key man and said much of it was unwaranted.

“What I saw, after our victory at the Velodrome (3-2 win over Marseille on Sunday), was the scathing criticism directed towards him (Ibrahimovic) by certain members of the media that I really didn’t understand,” said the former France and Bordeaux coach.

“These players are not machines. You can put doubt over a performance in one match but not the player himself who is still an extraordinary player.

The Parc des Princes outfit have also hit the top of Ligue 1 thanks to the win at Marseille and with seven matches to play they have a one point lead over Lyon in their bid for a third straight league title.

Reaching two finals is also immense pride for Blanc and the club’s Qatari owners who have financed the club’s rise to the top in France while they are now also challenging for top European honours.

“I am very proud to coach these boys here. I am really seeing what I want to see on the pitch and that gives me great satisfaction.”

“Of course the more the season advances, we are thinking more about it (the quadruple) but we haven’t done anything yet and we haven’t won anything.” added Blanc.

Bastia are their surprise opponents after defeating Monaco on penalties in the semi-finals to reach their first League Cup final since the defeat against PSG in 1995.

The Corsican club who got off to a sluggish start to their season, which prompted the sacking of Claude Makelele as coach and the arrival of Ghislain Printant, are five points above the relegation zone and in good position to stay in the top flight.

The club, who will bring a strong and vociferous crowd of support to the Stade de France, won their only piece of major silverware in 1981 when they defeated Saint-Etienne 2-1 to win the French Cup.