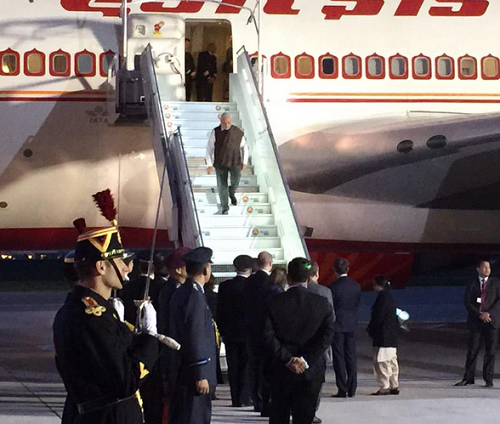 Paris: On the first leg of his three-nation tour, Prime Minister Narendra Modi on Friday arrived in France to hold talks on a range of issues including technology, civil nuclear and defence.Â

During his stay in Paris, Modi will hold talks with President Francois HollandeÂ and meet business leaders. The focus of talks will be civil nuclear, defence and trade.

A highlight of the four-day stay in France will be a boat ride by Modi and Hollande, which is being described as ‘naav pe charcha’ (chat on boat). Earlier, Modi has had ‘chai pe charcha’ (chat over tea) with foreign leaders, including President Barack Obama during his visit here in January.

In France, the Prime Minister will also visit the World War-I memorial and pay tributes to about 10,000 Indians who lost their lives while fighting alongside France.

India is hoping that French companies will participate in the ‘Make in India’ programme initiated by Modi.

From France, Modi will travel to Germany where again business and technology will be the focus with intent of attracting participation in ‘Make in India’.

He will first visit the Hannover Fair where India is a partner country this year. About 400 Indian companies are participating in the fair which will see the presence of about 100-120 Indian CEOs besides about 3000 German delegates.