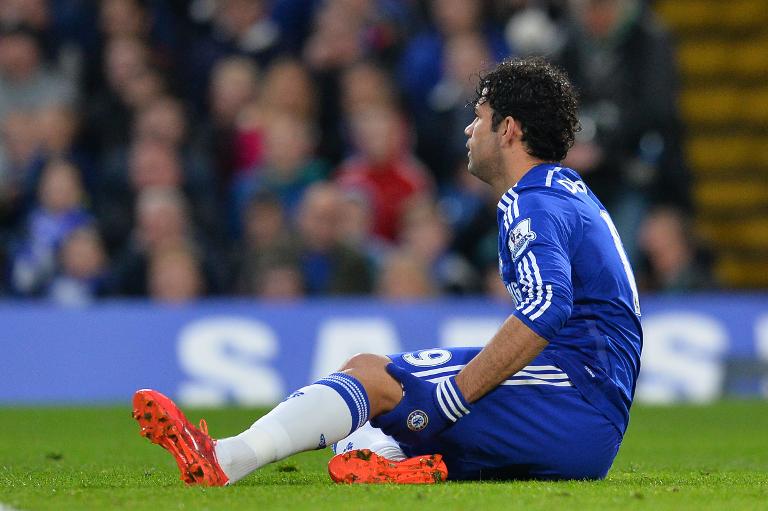 Jose Mourinho is confident Diego Costa will recover from his latest hamstring injury in time to feature in the final three weeks of Chelsea’s Premier League run-in.

The Spain international, the English top-flight’s joint leading scorer so far this term with 19 goals, has been ruled out of league leaders Chelsea’s short trip to west London rivals QPR on Sunday.

His absence comes after he managed just ten minutes in last weekend’s victory over Stoke City, having come on as a half-time substitute.

Costa has suffered a succession of problems with his hamstring throughout the season and the way he limped off against Stoke raised fears he would be sidelined for the rest of the campaign.

But Chelsea manager Mourinho expects the forward to be fit in time for the home clash with Crystal Palace on May 3.

Asked if Costa would feature again this season, Mourinho told reporters at Chelsea’s training ground on Friday: “Certainly. Sure. I think we have eight matches to play. If he plays four, it’s normal.

Mourinho insisted he was not concerned about the player’s injury and said it was too soon to decide whether Costa will be forced to undergo treatment during the close season.

“I’m not concerned, not concerned. I’m concerned about the match on Sunday,” the manager said. “I don’t know (if Costa will need post-season treatment).

“I don’t want to think about it for two or three weeks, until he’s ready to play. That’s my approach. I’m not going to cry about it until he can play.â€

Nemanja Matic and Cesc Fabregas will be included in the starting line-up against relegation candidates QPR despite both midfielders being one yellow card from a two-match suspension.

Both players have been cautioned nine times and a further booking ahead of Mondayâ€™s amnesty would rule them out of the meetings with title rivals Manchester United and Arsenal.

But with Chelsea seven points clear at the head of the table with a game in hand on their nearest rivals, Mourinho intends to field his strongest side in an attempt to move one step closer towards the title.

“The game (against QPR) is a three-point game. We need points. We need victories.

“We cannot choose matches. I don’t think it makes any sense to think about some matches and not about others. It’s a three-point match. We have to play with our maximum power to try and get them.”

Meanwhile Mourinho refused to comment on reports Chelsea have lodged a Â£4 million ($5.8 million) bid for FC Tokyo striker Yoshinuro Moto, although the Blues boss said he was aware of the striker.

“I know a little of him. I don’t think it’s nice for me to think about a player who plays for FC Tokyo. If the FC Tokyo coach spoke about my players I wouldn’t be happy. It’s not nice for me to speak about another club’s players,” Mourinho said.

Chelsea have, however, agreed a sponsorship deal with Yokohama and plans for a post-season tour of Japan.

But while Mourinho admitted the business side of a club is increasingly important, he insisted football interests would always take precedence ahead of commercial matters when it came to signing players.

“In modern football, when football is a business and an industry, you have to think about the financial situation; especially a club like Chelsea, who want to be in the rules and Financial Fair Play. It’s important for us.

“In modern management, you cannot close completely the door to a little bit of commercial interests. But, at the same time, a football club is always a football club and a top club only has space for very good players, or at least very good prospects.

“So no, we would never bring a player if he has no capacity to be in the squad for Chelsea FC.”