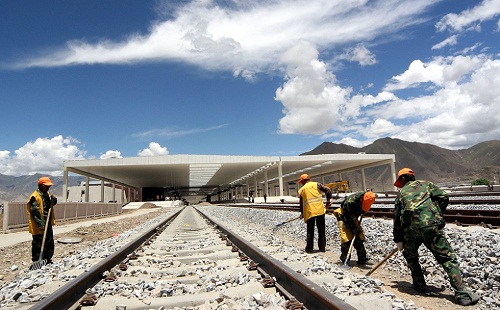 Beijing: China plans to build a 540-kilometre strategic high-speed rail link between Tibet and Nepal passing through a tunnel under Mt Everest, a move that could raise an alarm in India about China’s growing influence in its neighbourhood.
“A proposed extension of the Qinghai-Tibet Railway to the China-Nepal border through Tibet would boost bilateral trade and tourism as there is currently no rail line linking the two countries,” state-run Daily reported on Thursday.

The rail line is expected to be completed by 2020. However, there has been no word on the cost of the project.
The 1,956-km long Qinghai-Tibet railway already links the rest of China with the Tibetan capital Lhasa and beyond.
Wang Mengshu, a rail expert at the Chinese Academy of Engineering, said that engineers will face a number of difficulties once the project begins.
“If the proposal becomes reality, bilateral trade, especially in agricultural products, will get a strong boost, along with tourism and people-to-people exchanges,” he said.

“The changes in the elevation along the line are remarkable. The line is probably have to go through Qomolangma so that worker may have to dig some very long tunnels,” Wang said. Qomolangma Mountain is the Tibetan name for Mt Everest.

Restrained by rugged Himalayan mountains with its “remarkable” changes in elevation, trains on the line would probably have a maximum speed of 120 kmph.
Wang said that the project is being undertaken at Nepal’s request and that China has begun preparatory work.
Losang Jamcan, Chairman of the Tibet Autonomous Region, told Nepalese President Ram Baran Yadav during his visit to Tibet’s provincial capital Lhasa last month that China plans to extend the Tibet railway to Kermug, the Chinese town nearest to Nepal border where a border trade port has been built.

Besides Nepal, China had earlier announced plans to extend its Tibetan rail network to Bhutan and India.

During his recent visit to Nepal, Chinese Foreign Minister Wang Yi had asked the officials to conduct a feasibility study to extend the rail network to Kathmandu and beyond, the report said.