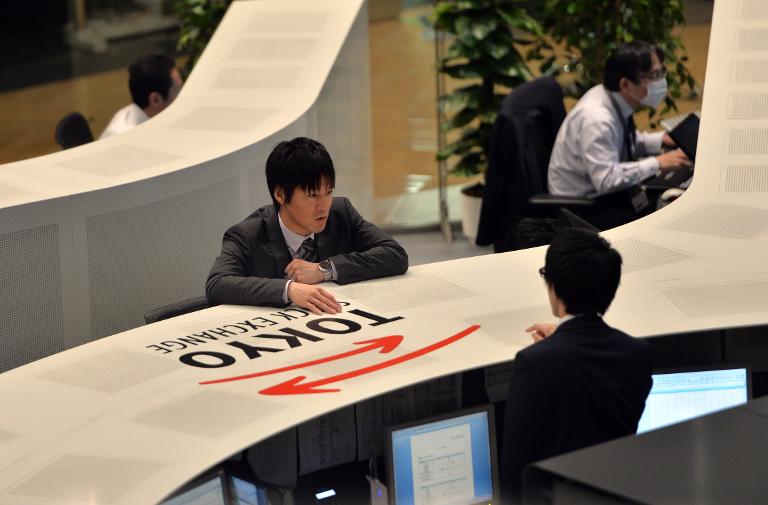 Hong Kong stocks continued their surge Friday, rallying for a third straight session as mainland investors pile in, while Tokyo dipped after breaching the 20,000 point mark for the first time in 15 years.

Tokyo’s Nikkei dipped 0.18 percent after breaching 20,000 — a level not seen since April 2000 — early on. Hong Kong, which climbed more than six percent over the previous two days, climbed 1.59 percent, while Sydney put on 0.23 percent and Seoul gained 1.00 percent.

Shanghai, which has almost doubled over the past year on hopes for fresh stimulus, added 0.24 percent.

Hong Kong’s Hang Seng Index has rocketed since reopening Wednesday after the long holiday weekend, with traders in the mainland making the most of a link-up between it and Shanghai’s exchange.

Turnover hit record highs on each of the past two days as investors north of the border seek out relatively cheap stocks after a surge in Shanghai that has been fuelled by hopes for stimulus to the world’s number two economy.

While the stock connect programme was initially met with little interest, mainland authorities’ decision last month to expand the number of fund-management firms allowed to buy in Hong Kong has seen activity surge.

But analysts have warned of a snap-back.

“This phenomenon of a large amount of money pushing into a space in the market in such a short period of time is exaggerating moves,” Tim Schroeders, a portfolio manager at Pengana Capital in Melbourne, told Bloomberg.

“It looks highly speculative and prone to a correction at some stage. There seems to be a lot of speculation fuelling fund flows in terms of policy stimulus from China which may or may not happen.”

In China the National Bureau of Statistics said inflation came in at 1.4 percent in March, the same as February and better than the 1.3 percent forecast in a Bloomberg survey.

The figures will be welcomed after January’s five-year low as authorities struggle to kickstart economic growth and fend off a painful spiral of deflation.

On Wall Street the three main indexes ended higher after the Labor Department said the number of first-time unemployment claims filed in the past four weeks fell to a nearly 15-year low.

In currency exchange the dollar was at 120.57 yen against 120.59 yen in New York but well up from 120.28 yen in Tokyo earlier Thursday as the US data revived talk of a summer interest rate hike by the Federal Reserve.

US benchmark West Texas Intermediate for delivery in May was down three cents to $50.76 in volatile morning trade and Brent crude for May rose 14 cents to $56.71.