Home Politics The Bank Job: In and out with millions 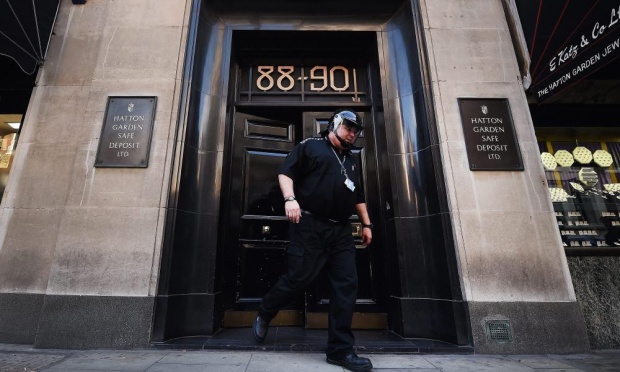 The scale and audacity of a raid on the heart of Londonâ€™s jewellery trade became clear on Wednesday as Scotland Yard revealed that a gang had broken into as many as 70 safe-deposit boxes containing jewellery and valuables, much of their cache uninsured.

It is understood heavy equipment was used to break through 18-inch metal doors to access the vault at Hatton Garden Safe Deposit, used by many jewellers to store stock. The raid took place while the facility was closed for the Easter holiday weekend. Jewellery worth millions of pounds was stolen, and worried clients were still waiting to find out whether their valuables were among the raidersâ€™ haul.

Scotland Yard said a detailed forensic examination of the scene was likely to take two days.

â€œThis is a slow and painstaking process involving forensic examination, photographing the scene and recovering exhibits in meticulous detail in order to preserve the evidence,â€ it said.

Police said they would be contacting victims directly when they are identified.

Exact details of how the gang members accessed the vault have not been revealed. There was speculation that they could have got in through the buildingâ€™s roof, while another theory was they may have hidden in an upstairs office on Thursday and waited to be locked in.

There was speculation, too, that any suspicious noises might have been ignored because residents believed they could be connected to work from the nearby Crossrail project. Crossrail had recently sent out letters to residents about work in the vicinity.

Among worried clients who gathered at the premises awaiting news, Michael Miller, a Knightsbridge jeweller, said he felt sick at the prospect of losing up to Â£50,000 of uninsured jewellery and watches. Among the items he had deposited was an irreplaceable Â£5,000 IWC GST Aquatimer watch he bought to give to his nine-year-old son on his 18th. â€œI bought it on the day he was born. They donâ€™t make it any more,â€ he said.

â€œLot of people keep their jewellery here to reduce insurance costs. I just canâ€™t believe it has happened,â€ he said. â€œIf you look at the website it says it is the safest place around. Iâ€™m extremely shocked. There is a double door before you even get to the vault.â€

Norman Bean, who said he had deposited Â£35,000 of jewellery, also uninsured and including a large diamond, was devastated when he heard of the raid. â€œI was shaking. I couldnâ€™t believe it.â€

Gerald Landon, who had items of â€œconsiderable valueâ€ in the safe said: â€œItâ€™s terrible. I am absolutely devastated. Itâ€™s a lifetime of work and stock Iâ€™ve had for many years.â€

There was anger from some at the lack of information. One jeweller, who gave his name as Michael, said: â€œNobody knows anything â€¦ They go in there, they lock everybody out. Just what are they doing? How long does it take for someone to count how many boxes are there?â€

He said his losses, if he was a victim, were â€œnot too catastrophicâ€, but he had friends with up to Â£2m deposited. It was common practice not to insure, he said, because the contents of the boxes changed on a day-to-day basis. â€œWhatever you had in there, you have lost,â€ he said.

The man, who asked not to be named, said the vault was a large rectangular room with deposit boxes behind individual steel doors on all four walls, with two keys needed to open each box. A metal door opened onto a passage that leads to the vault, which is guarded by an 18-inch thick door.

Roy Ramm, a former commander of the Flying Squad, said he would not be surprised if up to Â£200m worth of jewels were taken, given it was in Hatton Garden, and that the full total would probably never be known.

â€œThereâ€™s a sort of old-fashioned audacity about it,â€ he told BBC Radio 4â€™s Today programme. â€œThe amount of money and the goods that are taken is never fully revealed â€¦ and thereâ€™s a good chance that not everybody would declare.â€

Experts said it was likely any gems stolen would be sold abroad, possibly in the Middle East. â€œOnce diamonds have been recut and polished there is no geological map,â€ said diamond dealer Neil Duttson.

James Riley, the chief executive of the Gemmological Association of Great Britain, described it as a â€œHollywood-style heistâ€ that had shocked the community. It was impossible to estimate how much the thieves had got away with and the stolen goods would include family heirlooms and personal jewellery as well as stock from gem, diamond and pearl dealers, he said.

â€œIt is a crime that is so well thought out and planned itâ€™s taken everyone by surprise,â€ he said. The building was â€œa safe on steroidsâ€. â€œItâ€™s a lot of steel to get through to get to the items you are looking for.â€

SÃ©amus Fahy, the managing director of Voltaire Diamond, who owns a safety deposit vault in Dublin, said: â€œWith modern vault technology this shouldnâ€™t happen.â€ He said his companyâ€™s vaults had seismic and modular sensors that, if tampered with, would alert a 24/7 CCTV security company.

â€œFifty or 60 years ago the idea was pour concrete in to make it as thick as possible. But modern cutting equipment can get through concrete in no time,â€ he said.

The Hatton Garden Safe Deposit was also the target of a raid in 2003 in which Â£1.5m of jewellery and cash were stolen by a suspect who posed as a customer and emptied deposit boxes.