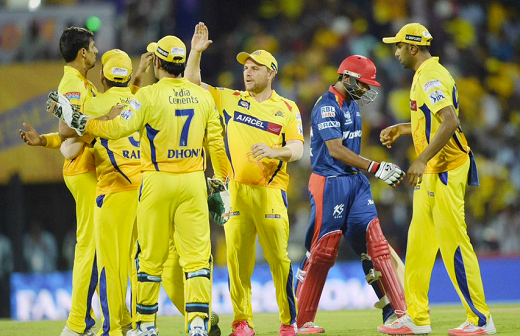 Chennai:Â The second match between Chennai Super Kings and Delhi Daredevils in the Indian Premier League ended with CSK winning the match by 1 runÂ on Thursday.

In reply to the 151 set by CSK, Mayank Agarwal and CM Gautam began the chase, but Gautam perished soon, dismissed by Nehra for 4 in the third over, bringing Albie Morkel into the crease. Nehra delivered a twin blow, removing Agarwal too for 15.Â

Shreyas Iyer played a blink and miss innings, walking back for 7 in the fifth over, taking the score to 39/3. Kedhar Jadhav was the new man in and with Morkel, he took the score to 67/3 in 10 overs, with 84 required from 60 balls.

Jadhav was removed by Mohit Sharma for 20 in the fourteenth over. The next man to be dismissed was the most expensive player of this edition of IPL, Â Yuvraj Singh, who was sent back to the pavillion by Bravo for 9, taking the score to 102/5, 49 required from 30 balls. Duminy was the next casualty, dismissed by Ishwar Pandey for 5 in the sixteenth over.

Albie Morkel stitched a patient half century, but Coutler-Nile fell for 5 on the other end, taken by Ashwin. The eighth wicket to fall was that of Mishra for 4 in the 19th over, with 19 required off the last over. Tahir fell prey to Bravo for 2, with Albie Morkel (75) only able to manage 149/9.

Earlier, the match began with Duminy winning the toss for Delhi and electing to field first. Smith and McCullum opened the innings for CSK, and even though a brisk start looked on the cards, McCullum fell to Coutler-Nile for 4 in the second over, bringing Raina into the middle.Â

The Delhi outfit managed to tumble yet another wicket in the form of Raina, who was sent back by Coutler-Nile for 4 in the fourth over. At the end of the fifth over, the score was 49/2. The next wicket to fall was that of Smith, who was taken by Tahir for 34 in the nineth over, taking the score to 82/3.

The wickets kept crumbling, the next casualty being Faf du Plessis, who was dismissed by Duminy for 32 in the thirteenth over. This brought Dhoni into the middle and at the end of 15 overs, the score was 116/4. Jadeja walked back to the pavilion, done in by Mishra for 17 in the 16th over, bringing Bravo into the middle.

He didn’t last long either, as he was taken by Joseph for 1, bringing Ashwin in. The last man to fall was Dhoni, who was dismissed by Coutler-Nile closing the CSK innings at 150/7
Â