Home Politics Mufflerman vs Modi: Whose the daddy? 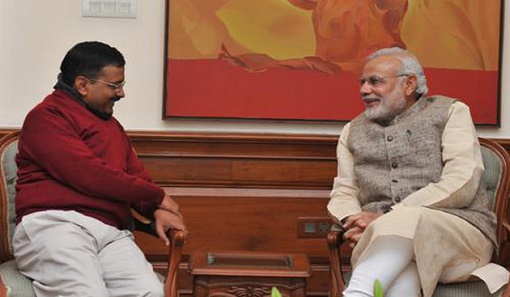 New Delhi: DelhiÂ Chief MinisterÂ ArvindÂ Kejriwal on Thursday said his “people-centric” model of governance was better than Prime Minister NarendraÂ Modi’s model that he alleged was centred around a “handful” of the country’s rich.Â

Stressing that he was focusing on governance and not internal fights in AAP, Kejriwal also said that after coming to power he has realised that his “real fight” was against bureaucracy and he was working on ushering in major “structural” changes.Â

“I am above all these fights. I am concentrating on governance. I have not come here to fight,” Kejriwal said after launching the book titled “The Crown Prince, TheGladiatorÂ and The Hope” authored by AAP leader Ashutosh.Â

Asked to weight his model of governance against Modi’s, Kejriwal emhasised that “in our model a common man is at the centre whereas in his (Modi) model a handful of the country’s rich people is at the centre.”Â

“Policies are made for them. But we make policies for common men,” he said.