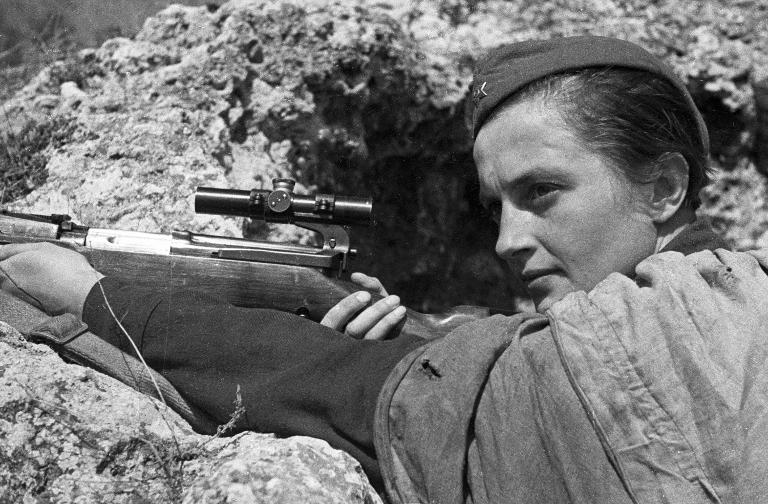 A Russian-Ukrainian film about a legendary Soviet sniper nicknamed “Lady Death” is aiming to be a hit on the silver screen in both nations, despite the crisis that has turned the former allies against each other.

Titled “Battle for Sevastopol” in Russia but “Indestructible” across the border in Ukraine, the movie — about a female sharpshooter who reportedly killed more than 300 Nazi troops — is a co-production between the two countries made just before relations nosedived.

And despite the freeze in ties between the former Soviet nations that has seen Ukraine ban a slew of modern Russian films, the $5 million (4.6 million euros) movie was launched last week with glitzy gala premieres in both Moscow and Kiev.

“Despite everything, it has been accepted both by the new Ukrainian authorities and our Russian ones,” said director Sergei Mokritsky, who grew up in Ukraine but lives in Russia.

“I am hoping this film will unite people and at least for two hours, for the length of this film, people can come together in our shared history,” he told AFP.

The Russian-language film is about Ukrainian-born sniper Lyudmila Pavlichenko, nicknamed “Lady Death”, and comes out ahead of the 70th anniversary in May of the Allied victory in the European theatre of World War II.

Trained as a sharpshooter and sent to fight on the frontline in 1941, aged 25, Pavlichenko in less than a year was said to have killed 309 Nazis during battles in Odessa and the strategic city of Sevastopol on Ukraine’s Crimea peninsula.

The new biopic was shot on location in Sevastopol in November and December 2013 during the Maidan popular uprising in Kiev, shortly before the toppling of pro-Russian president Viktor Yanukovych and Russia’s annexation of Crimea.

“I thought we can’t stop filming, whatever happens,” Mokritsky recalled. “The faster, the better, because later, it may not be possible.”

The differing titles for the film highlight some of the bitterest divisions between Russia and Ukraine.

In Russian, the title “Battle for Sevastopol” resonates with the patriotic fervour generated by Crimea’s annexation in March last year, while the Ukrainian name “Indestructible” hints at the national spirit as government forces battle a pro-Russian uprising in the country’s east.

As played by Yulia Peresild, the film’s heroine is unsmiling and unremittingly tough.

“War’s no place for cowards,” she says. She vows to “kill 100 enemies”, hugging her rifle, and upbraids a fellow sniper for firing a shot to finish off a Nazi dying in agony.

“They don’t deserve an easy death,” she says.

In graphic battle scenes with blood spurting and shells exploding, she shoots to kill without flinching. But she has a softer side, too.

She finds love in the arms of a tough commander, who is killed soon afterwards. She then falls for a fellow sniper and the couple plan to marry, but she is devastated when he too is killed.

Finally she gets injured and is evacuated from Sevastopol, soon before the Nazis captured the strategic city in 1942.

The next stage in Pavlichenko’s life is far from the horrors of the frontline.

Sensing her propaganda value, the Soviet Union sent her to tour Canada and the United States, where she called for the opening of a new front in the war.

Dressed in an army tunic and cap, she became an object of fascination, nicknamed “Lady Death” by journalists.

She met American First Lady Eleanor Roosevelt and was invited to stay at the White House as a personal guest. The women stayed in touch and Roosevelt met her again years later in Moscow.

In the film, she reveals her emotional turmoil while cooking borscht with a motherly Roosevelt, played by British actress Joan Blackham.

The film comes hot on the heels of the global smash directed by Clint Eastwood about a US Navy Seal sharpshooter “American Sniper”.

Critics have lauded the vivid photography in the Ukrainian-Russian film, but complain that Pavlichenko does not come across as a fully-rounded character.

“She faces all these events with the same tense expression,” wrote Gazeta.ru news site.

As for the two governments now locked in a bitter feud, both say they are rooting for the film to be a success — just not quite for the same reasons.

“We see it as a Ukrainian film,” a spokesman for Kiev’s state film agency told AFP, saying that 79 percent of the film’s financing is Ukrainian, both from the state and private investors.

Meanwhile in Russia, an unusually conciliatory Culture Minister Vladimir Medinsky said he hoped the movie might remind the rivals of when they fought side by side.

“It’s very important today that it’s a Ukrainian-Russian co-production. This is a film about our shared victory,” Medinsky said.