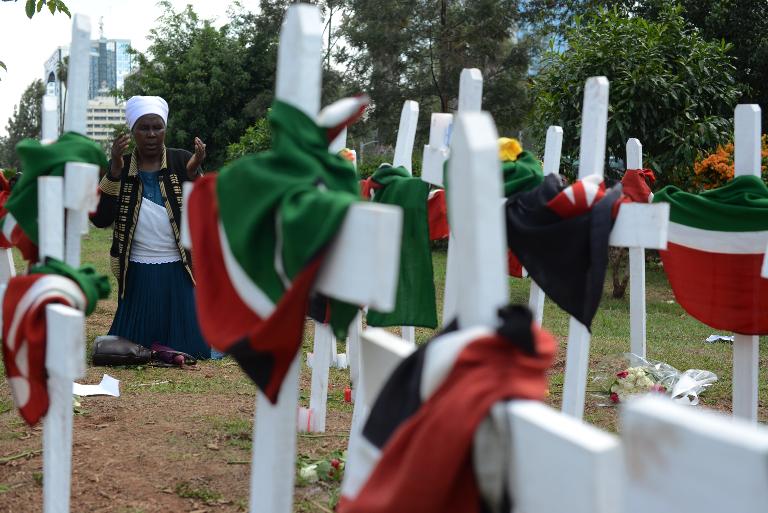 Kenya froze key money transfer companies vital for Somalia Wednesday after the police chief issued a list of 85 people and businesses with suspected links to the Al-Qaeda-linked Shebab.

Top of the list issued in an official government gazette notice was alleged Shebab commander Mohamed Mohamud, said to be the mastermind behind the university massacre of almost 150 people last week.

But the list also included money transfer companies that provide a crucial way for relatives to send remittances from abroad to war-torn Somalia, including Dahabshiil, one of the most important transfer companies across the wider Horn of Africa region.

Their suspension in Kenya would have major impact on money transfers, with aid agencies warning in the past their suspension would hit some of poorest people the hardest.

With no formal banking system in the impoverished country, diaspora Somalis turn to money transfer services to send money back home to support their families, sending some $1.3 billion (1.1 billion euros) each year, dwarfing foreign aid.

The move was immediately criticised.

“If you look at that list, it is sad that licensed entities are put together with suspected terrorists,” said Anthony Wachira, the head of the Kenya Forex Remittance Association.

He said 13 of the companies were licensed by the Central Bank of Kenya as well as the association.

“I would only request the regulator and the security machinery to provide for an investigative period where they should allow them to operate when they are doing the investigations,” he said.

Kenyan President Uhuru Kenyatta on Saturday warned Shebab fighters his government will respond to their killing of 148 people in the university in Garissa in the “severest way” possible, with warplanes on Monday attacking Islamist bases in southern Somalia.

But Kenyatta also warned that the masterminds behind last Thursday’s attack were inside Kenya, not Somalia.

The notice, issued under Kenya’s prevention of terrorism act and which gives the names listed 24 hours to demonstrate why they “should not be declared a specified entity,” was signed by Kenya’s police chief Joseph Boinett.

There are huge flows of money both ways between the neighbouring nations, for trade and business, as well as in lifeline remittances to war-torn Somalia from relatives in the region.

The day-long siege at Garissa University, situated near the border with Somalia, claimed 148 lives, including 142 students, three police officers and three soldiers.

It was Kenya’s deadliest attack since the 1998 bombing of the US embassy in Nairobi.

“Actions taken are consistent with the international law on financing terrorism…. We produced a list of persons and entities who may have been involved in facilitating terrorism activities,” said top treasury official Kamau Thugge.

Many of those listed are individuals, but also include transport companies and HAKI Africa, a Mombasa-based civil society group.

“As you are aware we are only implementing human rights programmes not terrorism. Any delay of funds will have a negative impact on our work,” said Hussein Khalid, Haki Africa executive director.

On Saturday, Shebab warned of a “long, gruesome war” unless Kenya withdraws its troops from Somalia.

The list comes a day after Somali President Hassan Sheikh Mohamud said his government was working to reform banking laws to comply with international anti-terrorism legislation, pleading for more time as “remittances are a critical lifeline to millions in poverty.”

A $215,000 (200,000 euro) bounty has also been offered for alleged Shebab commander Mohamud, a former Kenyan teacher also known as “Kuno”, who is believed to be in Somalia.